Another round, same Kristoffersson World RX of Latvia

Last weekend was a rallycross festival – World RX of Latvia. 9 out of 12 World RX rounds are behind us. It’s quite possible that Kristoffersson will be able to celebrate the next world championship in two weeks in the United States. At the moment he has 70 points advantage over the second in the table – Mattias Ekstrom. Let’s not overtake the facts. Familiarize yourself with our summary of World RX of Latvia.

Traditionally, before the fight for points, drivers had the opportunity to several test runs on the track. Drivers check the condition of the track, gravel sections and the technical condition of the car. Mattias Ekström showed the best test drive. Peugeots and Volkswagens could not catch up with him. His advantage was really small! Timmy Hansen lost just 0.09 seconds to his compatriot. The current World Champion has only fourth time. Eighth place was taken by Nico Muller. Although many people thought that Liam Doran would join TOP10. 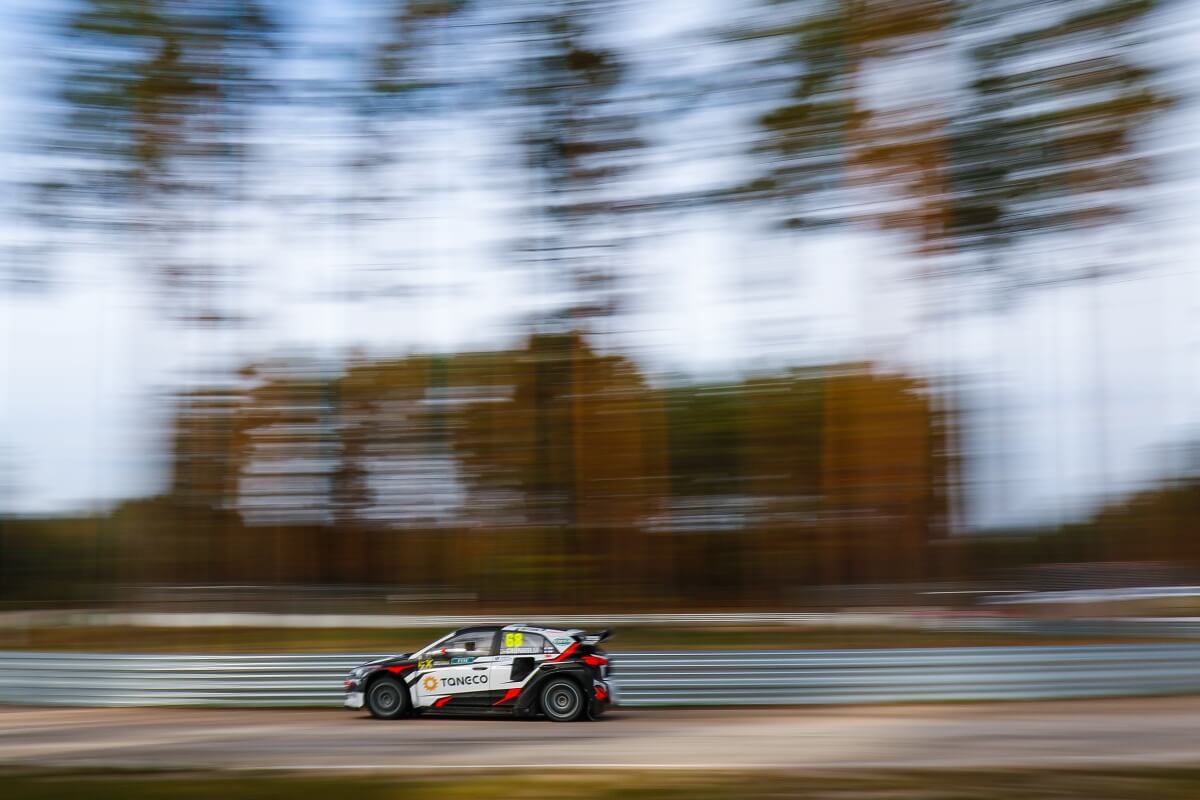 Such minimal time differences don’t happen even in Formula 1! In the first Q1 race, Loeb, Chicherit, Timerzyanov, Demoustier and Eriksson competed with each other. Happiness missed the last one – he didn’t finish the last lap. The mechanics had a lot of work after the first race! Sébastien Loeb turned out to be the best in this battle, who jumped back to the second Chicherit for over 6 seconds. Puegeot was better than Renault. In the second race, Petter Solberg competed against Mattias Ekström. We don’t know what is the private relationship between drivers but on the track they are very aggressive towards each other. Volkswagen Polo, however, proved to be better than Audi S1 managed by Ekki and Bakkerud. Scheider managed the worst, losing 19 seconds to the winner of the race. The best in race 3 was Timmy Hansen. Nico Müller sat on the bumper for most of the race in the Audi S1 with DTM, who had to settle for second place. Janis Baumanis was also correct, who was third. The other drivers were far, far behind. They were Wurz and Bennett. By far the best and fastest qualification of the first qualification was the last race. Johan Kristoffersson received attacks from Niclas Grönholm, Liam Doran, Kevin Hansen and Robin Larsson. What can we say? Champion overtook Niclas for 6 seconds, and the rest of the stake was far, faaar behind.

We didn’t have to wait long for the next qualification (Q2). Timo Scheider proved to be the best in the first race of Q1. A fierce battle took place between the remaining drivers. Eriksson, Larsson and Wurz had time differences of less than one second. The smallest mistake of one of them could have fatal consequences. Oliver Bennett was left behind. He crossed the finish line last. In the second race, Global RallyCross champion from 2013 – Topi Heikkinen left Baumanis, Doran and Kevin Hansen behind. The latter was left behind the rest due to the turmoil on the track. Bad luck caught Grégoire Demoustier. The driver did not finish the last lap and did not receive points for this qualification. The third race belonged to the Audi S1 ​​driver. Andreas Bakkerud defeated Niclas Grönholm by almost 4 seconds. The next line exceeded Timerzyanov, Chicherit and Müller. The latter had a car breakdown, however, he managed to get to the finish line and collect valuable points. The last race was unlucky for the Peugeot team. Timmy Hansen damaged the disappointment and finished the race last. Sebastien Loeb was only the fourth. As you can guess, the next victory reached Kristoffersson beating Mattias Ekström (+1.549) and Petter Solberg (+1.859). 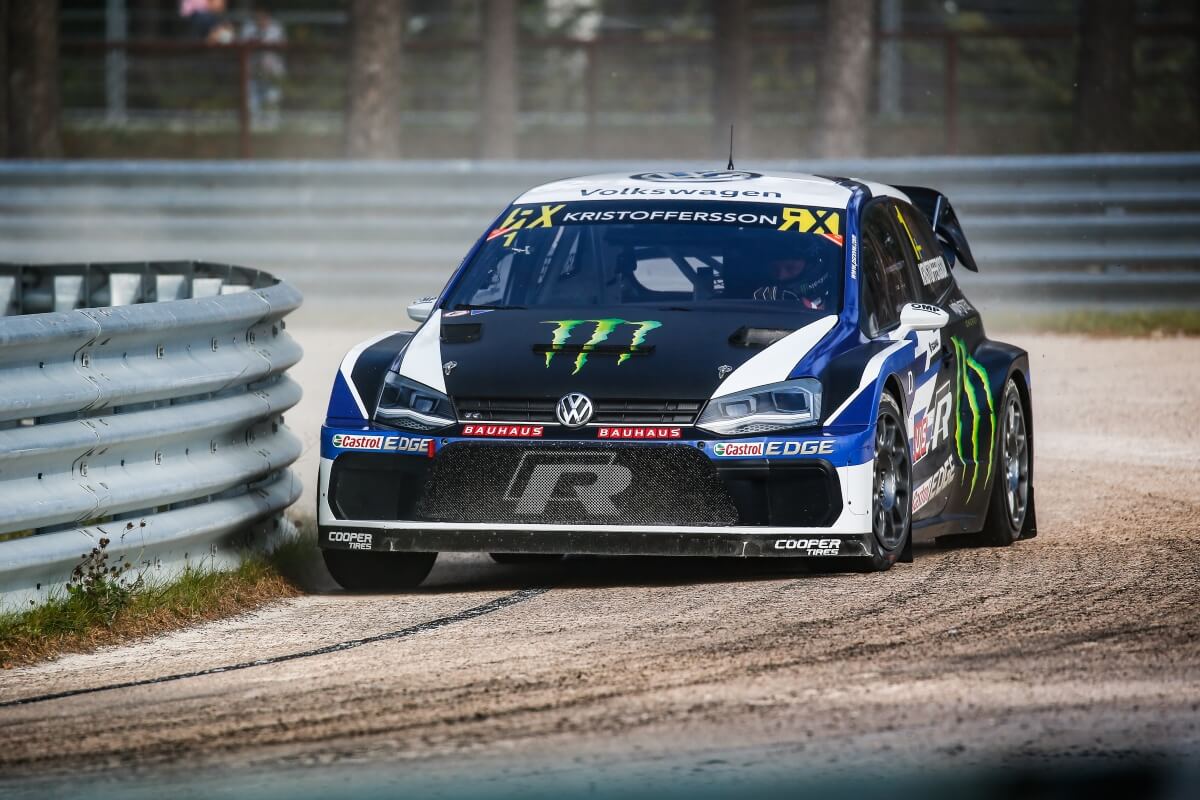 After a night of rest and reflection, the drivers returned to the fight as part of the World RX of Latvia. This had a good impact on Peugeot drivers who showed their class on Sunday races after the weak Saturday. In the Q3 first race, the Hansen brothers competed against Nico Müller, Demoustier and Bennett. Timmy Hansen turned out to be the best. DMT driver – Müller was second at the finish line. Kevin Hansen lost 4,301 s to his brother, which secured himself third place. The second race was successful by the Peugeot team. Sébastien Loeb confidently defeated the competition by jumping back to the second Chicherit for four and a half seconds. Timo Scheider scored a very good start in the third race, thanks to which he appeared in the top 12. Behind his seat, Grönholm and Timerzyanov finished. The last race in Q3 belonged to Volkswagen and Audi S1. Perfect Kristoffersson did not make any mistakes again. He passed through the joker lap on the last lap and was the first to cross the finish line. Next were Mattias Ekström, Andread Bakkerud and Petter Solberg.

Q4 is the last chance for drivers to qualify for the semi-finals. There is no room for errors. The only thing that mattered was the best time and competition. Drivers can not wait for their colleagues’ mistakes – they have to count on themselves. Already in the first race an additional dose of motivation gained Liam Doran, who despite the weaker performances in previous races, did not make any mistakes. Thus, he secured a pass to the semi-final. Second in the first Q4 race was Larsson. The rest is history. The second race in Q4 was won by Volkswagen Polo led by Petter Solberg. Andreas Bakkerud did not do well at the Latvian track and had to settle for second place. Timur Timerzyanov defeated him very much. However, it did not happen. The strategy dominated in the third race! Kevin Hansen, who kept the lead throughout the race, was the best at the start. The decisive moment was the descent with the joker lap on the last lap. Hansen managed to leave the joker lap before the rushing Niclas Grönholm (+1,623) and Chicherit. Grönholm was really great! The only obstacle in the victory was probably the lack of support from car manufacturers. In the last qualifying race we had a surprise at the very start. Nico Müller showed a great reaction and took off first. However, he failed to keep the lead until the end of the lap. Kristoffersson used the first opportunity to overtake and kept the lead until the very end. The time differences were really small! Loeb was second, Timmy Hansen was third. 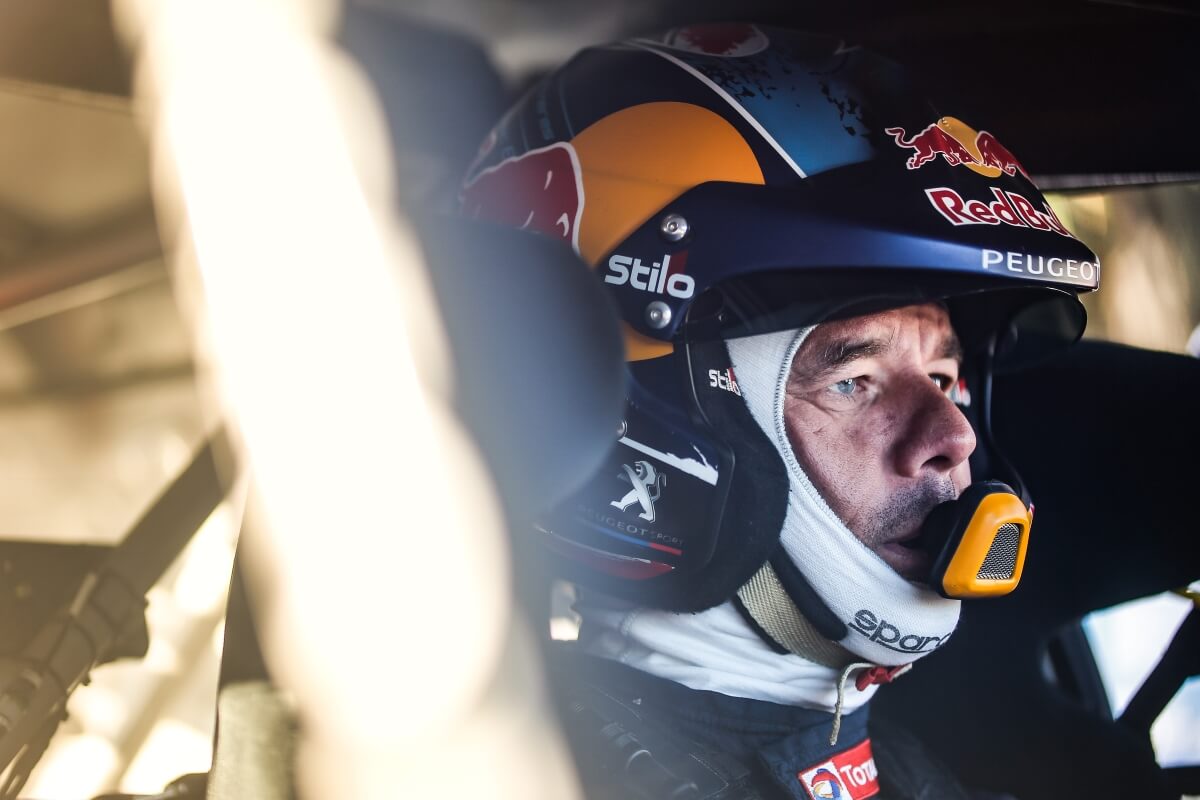 Johan Kristoffersson and Sébastien Loeb won the semi-finals at Bikernieki. Mattias Ekström and Niclas Grönholm also advanced from the first race. In the second semi-final, the top three were formed by Peugeot drivers. Behind Loeb, Hansen brothers – Timmy and Kevin finished. Petter Solberg was last on finish line after contact with Guerlain Chicherit. Timur Timerzyanov didn’t drive the last lap. Nico Müller was eliminated just after the start of the 2nd race because of steering system error at Audi. 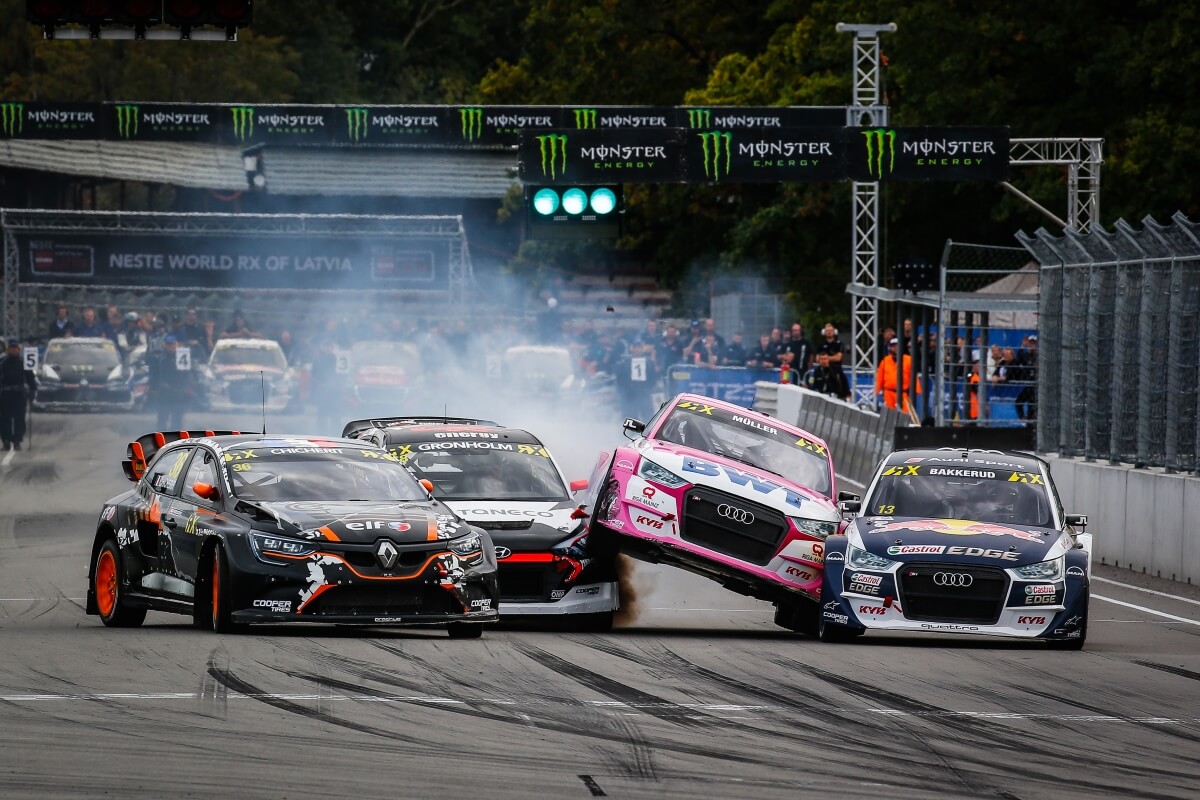 Johan Kristoffersson again won the Latvian round of the rallycross world championship! He set a record of victories in one season, winning for the eighth time. Mattias Ekström scored the second podium this season. How was the final? The best response to the start was Mattias Ekström. However, Kristoffersson was first in the first corner of the track. The rest of the drivers followed him. The Hansen brothers were left behind, so they drove quickly through Joker Lap. Niclas Grönholm looked great, who lacked some luck. After leaving the joker lap he was in the fourth position. He did what he could, risking a lot, but to no avail. He did not make it to the podium. Kristoffersson probably won the final race and the place on the podium was completed by Ekstrom and Loeb.