Kristoffersson did it again? World RX of France

FIA World Rallycross Championships have returned to Europe with 8th round. World RX of France round in Loheac didn’t bring us a surprise, for the seventh time this season, Johan Kristoffersson wins! From the beginning of the weekend, the fans put pressure on Team Peugeot. Sébastien Loeb, Timmy Hansen and Kevin Hansen were to fight for victory at homeland. Competition against the eyes of compatriots gives additional motivation. Sometimes, however, it’s too little to stand on the highest step of the podium.

Niclas Grönholm announced a fierce fight as part of the World RX of France. There were key changes in the car’s settings, which we could see the effects during the training sessions. The Finnish driver ran out of 0.082s to the best in this part of the competition Petter Solberg. The current Champion, Johan Kristoffersson, achieved the third time. Volkswagen really engages in rallycross, which can be seen from the successes of its teams in World RX and ARX. Liam Doran deserves the applause. He returned to the competition after the break. He managed to achieve the fifth time! 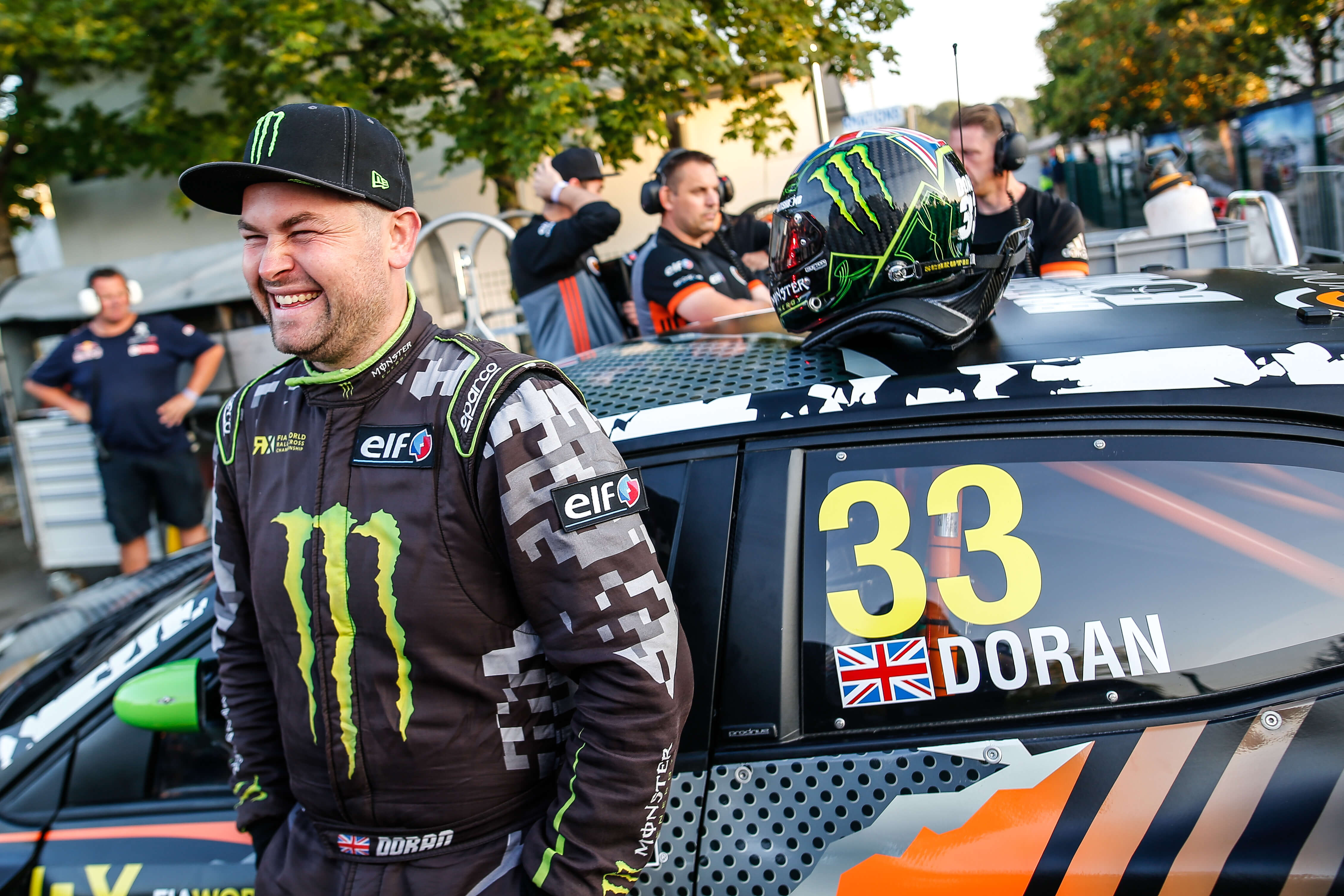 After a short warm-up the drivers were able to compete properly during Q1. Timmy Hansen won the first race with a 2.789 second advantage over Timur Timerzyanow. Next places were taken by Kevin Eriksson and Toomas Heikkinen. The pressure on Hansen brothers was really big. Timmy’s younger brother – Kevin Hansen left behind in the second race Andrew Jordan, Davy Jeanney & Tommy Rustad. Mattias Ekström dominated race 3, defeating Niclas Grönholm, Jānis Baumanis & Guerlain Chicherit. Audi announced the withdrawal from World RX which gave Audi S1 driver additional motivation! Malicious say: the podium this season or never. In the fastest race 4, Johan Kristoffersson was first! Dust behind his car was watched by Liam Doran, Grégoire Demoustier, Emmanuel Anne and Oliver Bennett. The first series of qualifications was closed by race 5. Sébastien Loeb led to the last lap. Andreas Bakkerud and Petter Solberg beat him on last meters. Loeb passed the finish line with a loss of 0.618 seconds. The results were supplemented by Timo Scheider and 71-year-old Hervé Lemonnier. 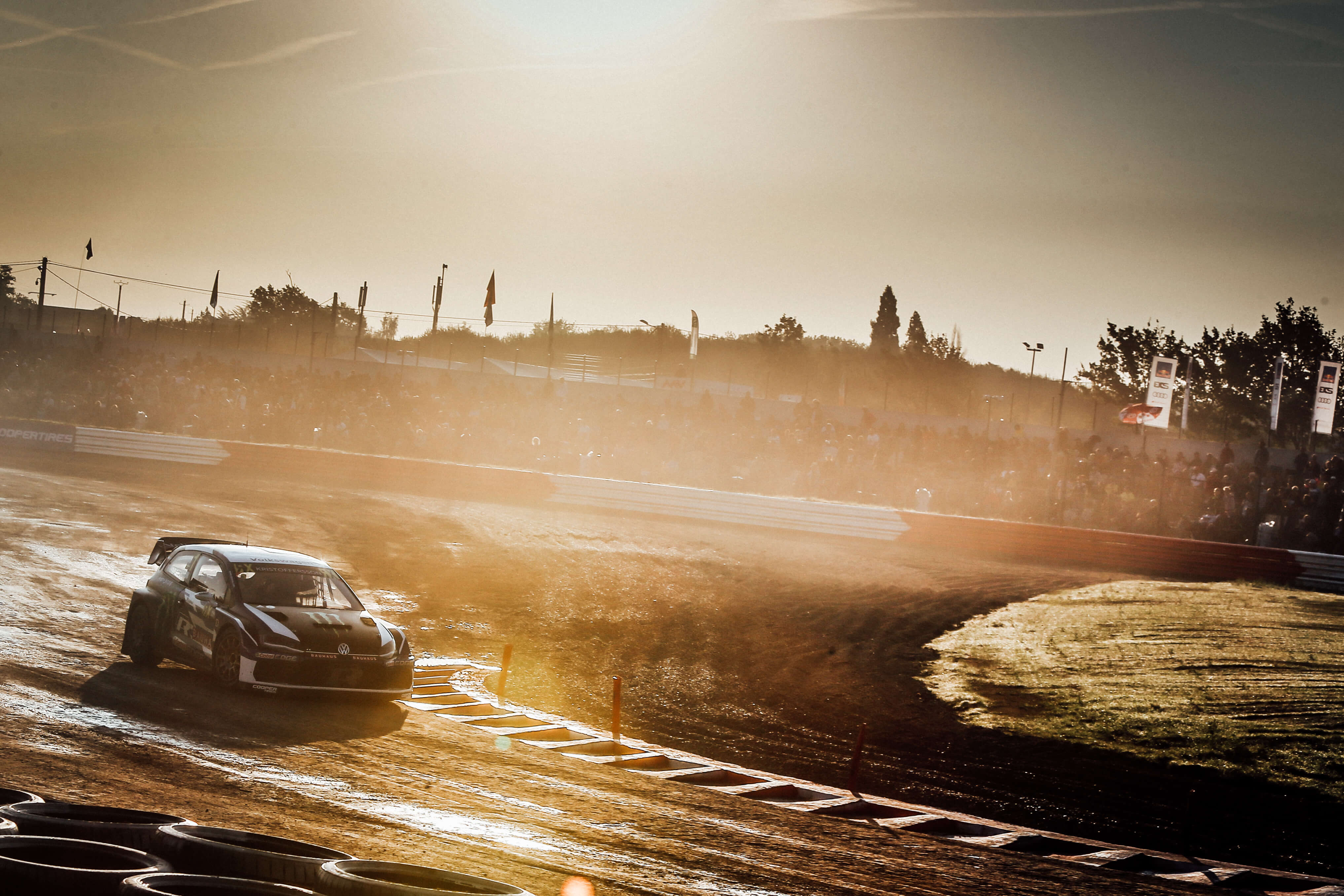 In the Q2, Audi turned out to be better than Volkswagen! In the first race, Oliver Bennett left behind O’Donovan, Sérazin, Lemonnier and Anne. The second fastest was Topi Heikkinen. It’s nice to watch the driver at world championships! There is great potential in it! Next places were taken by Davy Jeanney, Larsson and Rustad. Timo Scheider was eliminated on the third lap. Kevin Eriksson won the race 3. There was a shortage of Megane RS belonging to Guerlain Chicherit to win the Eriksson victory. However, it did not happen. Timur Timerzyanov crossed the finish line third. Mattias Ekström showed off the best time in race 4. Niclas Grönholm lost the match by almost a half second. Kevin Hansen had to settle for the third result in his race. His expectations were definitely bigger. Q2 finished race 5. The drivers Andreas Bakkerud and Sébastien Loeb scored Joker Lap on the third lap. Johan Kristoffersson took control and finished 0.920 s ahead of Bakkerud. Loeb fell to fifth place – for Timmy Hansen and Petter Solberg. Among the fans there was a slogan: a small finale in qualifying.

Further competition returned only on Sunday. Liam Doran was doing great! Nobody expected such good results from his side after returning to World RX. Timo Scheider hit the barrier in the first race. Davy Jeanney overtook Grégoire Demoustrier, Hervé Lemonnier and Emmanuel Anne. Robin Larsson was the best in the second match. Unfortunately, the driver received a penalty and fell to third place. Hence, Tommy Rustad gained valuable points. Liam Doran shined in race 3, passing the finish line as much as 2,878 s before Timur Timerzyanov. Next places were taken by Jānis Baumanis, Toomas Heikkinen and Oliver Bennett. Timmy Hansen won the race 4 – ahead of Petter Solberg (+0.249), Guerlain Chicherit (+0.706) and Kevin Hansen (+1,391). Sébastien Loeb (+5.52) was in trouble after contact on the first lap. We had to wait for the best race until the very end of Q3. Johan Kristoffersson defeated Mattias Ekström in the summit match. Andreas Bakkerud was not much worse. The results were supplemented by Kevin Eriksson (+4.476) and Niclas Grönholm (+5,942). 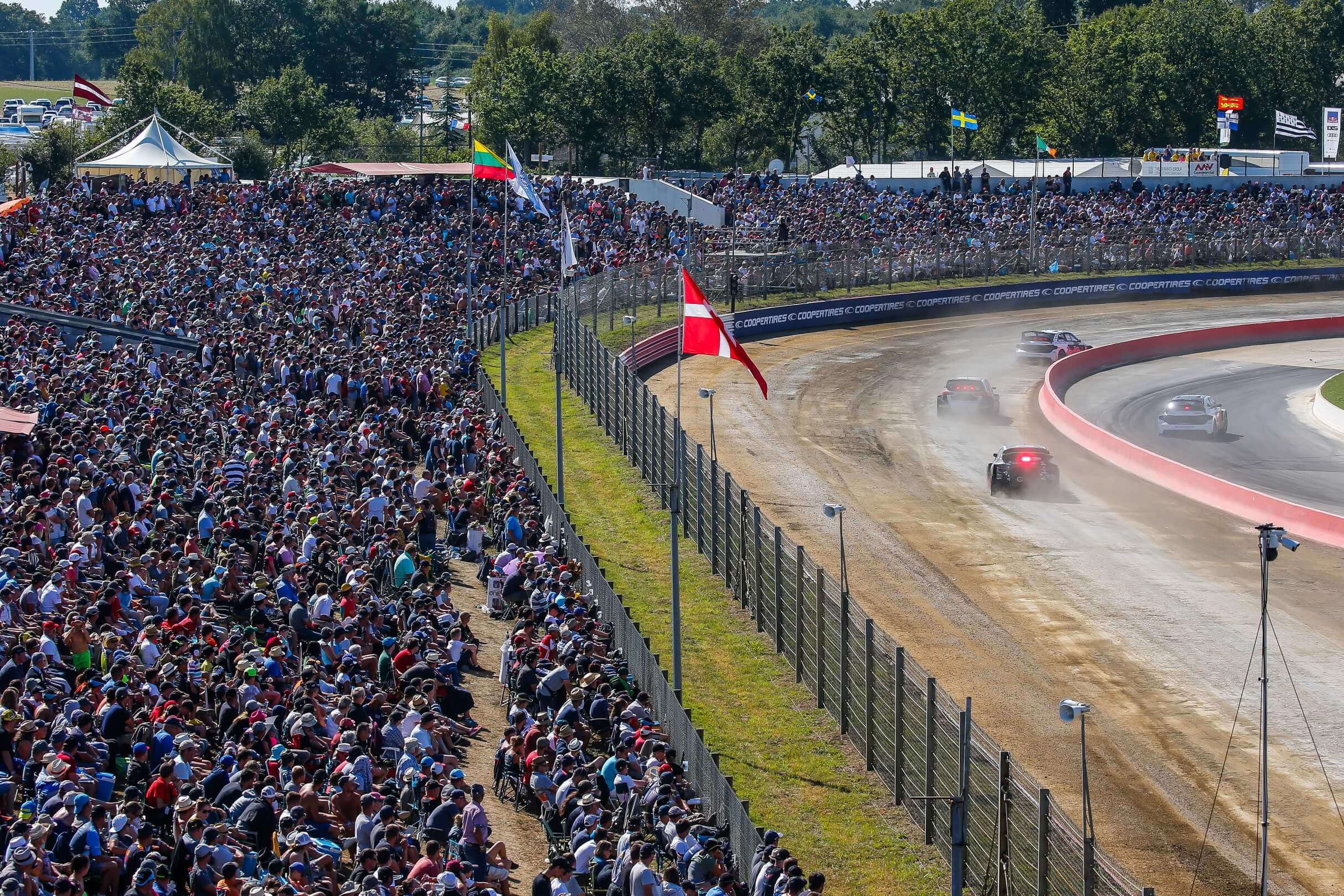 Johan Kristoffersson and Petter Solberg shot a doublet for PSRX Volkswagen Sweden in the fourth qualifiers at the Circuit de Lohéac. Behind the two Polos were Peugeot Timmy and Kevin Hansen, Audi Andreas Bakkerud – the second behind Kristoffersson in total results. Sébastien Loeb, ninth in Q4, was promoted to the semi-finals from the last, 12th place.

Two semi-finals have been played. Johan Kristoffersson, Mattias Ekstrom, Timmy Hansen, Kevin Hansen, Guerlain Chicherit and Niclas Grönholm competed in the first semi-final. Already on the straight starting line the Audi S1 team of the EKS team advanced. Ekstrom traveled through Joker Lap on the fourth lap and to the fans’ surprise – he left the world champion behind, winning the semi-final!

In the second semi-final Andreas Bakkerud fought Sébastien Loeb, Petter Solberg, Kevin Eriksson, Timur Timerzyanov and Liam Doran. Frenchman Sebastien Loeb showed off the great side. The support of the fans was of great importance here! The driver, despite the worse starting position, won second place in the semi-final! The EKS driver was the best. This meant that two Audi S1 will start from the first line in the final. They could not have imagined a better opportunity for blocking. The most important was choosing the right tactics. 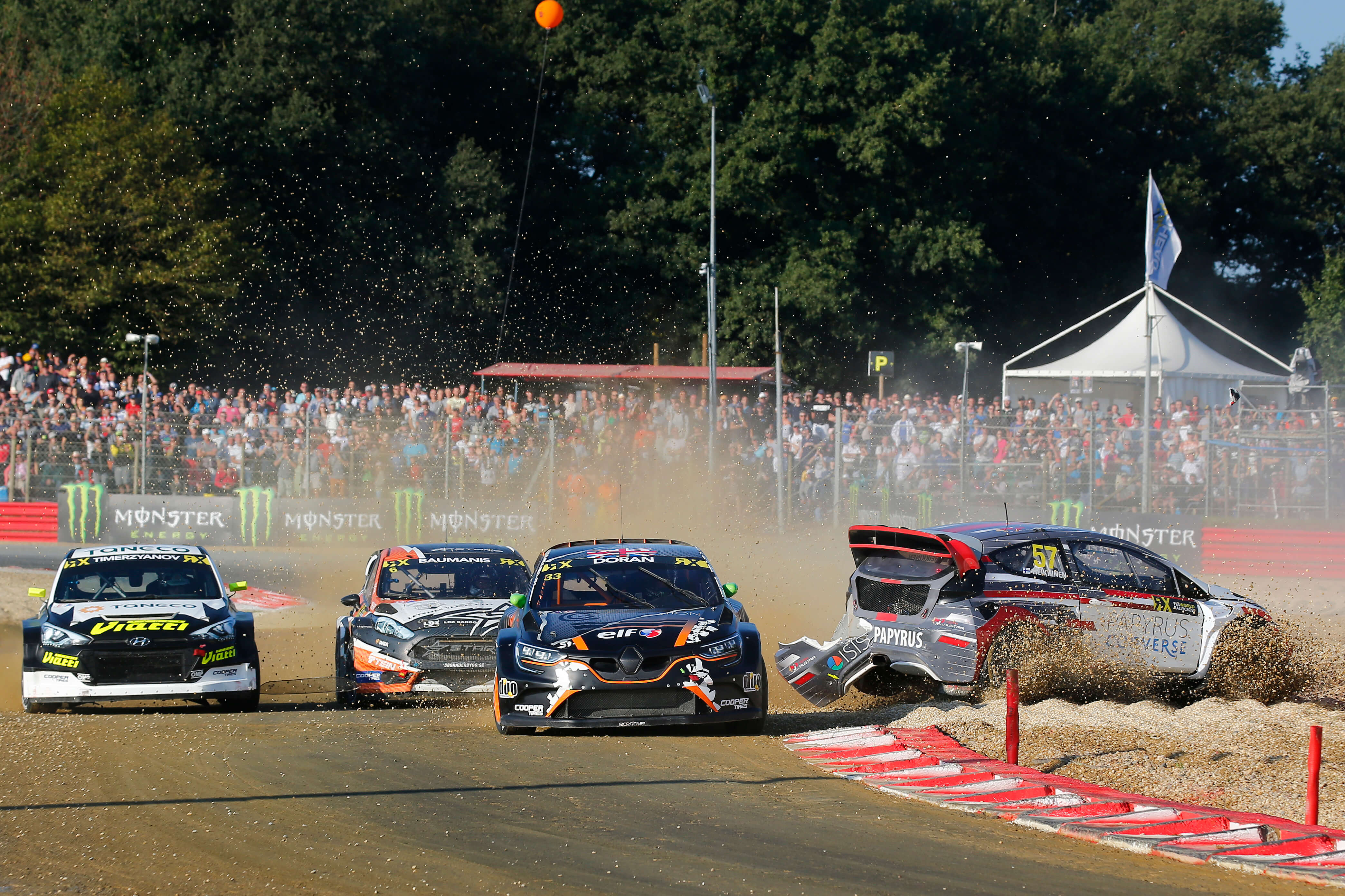 
Have EKS drivers managed to block Volkswagen drivers? Who showed off better strategy and driving technique? You will find the answers in this video. This can not be described in words. We have already written about it several times, we will repeat it again: the wonderful Johan Kristoffersson reaches for the next victory! It’s already the seventh this season! Can anyone stop him? 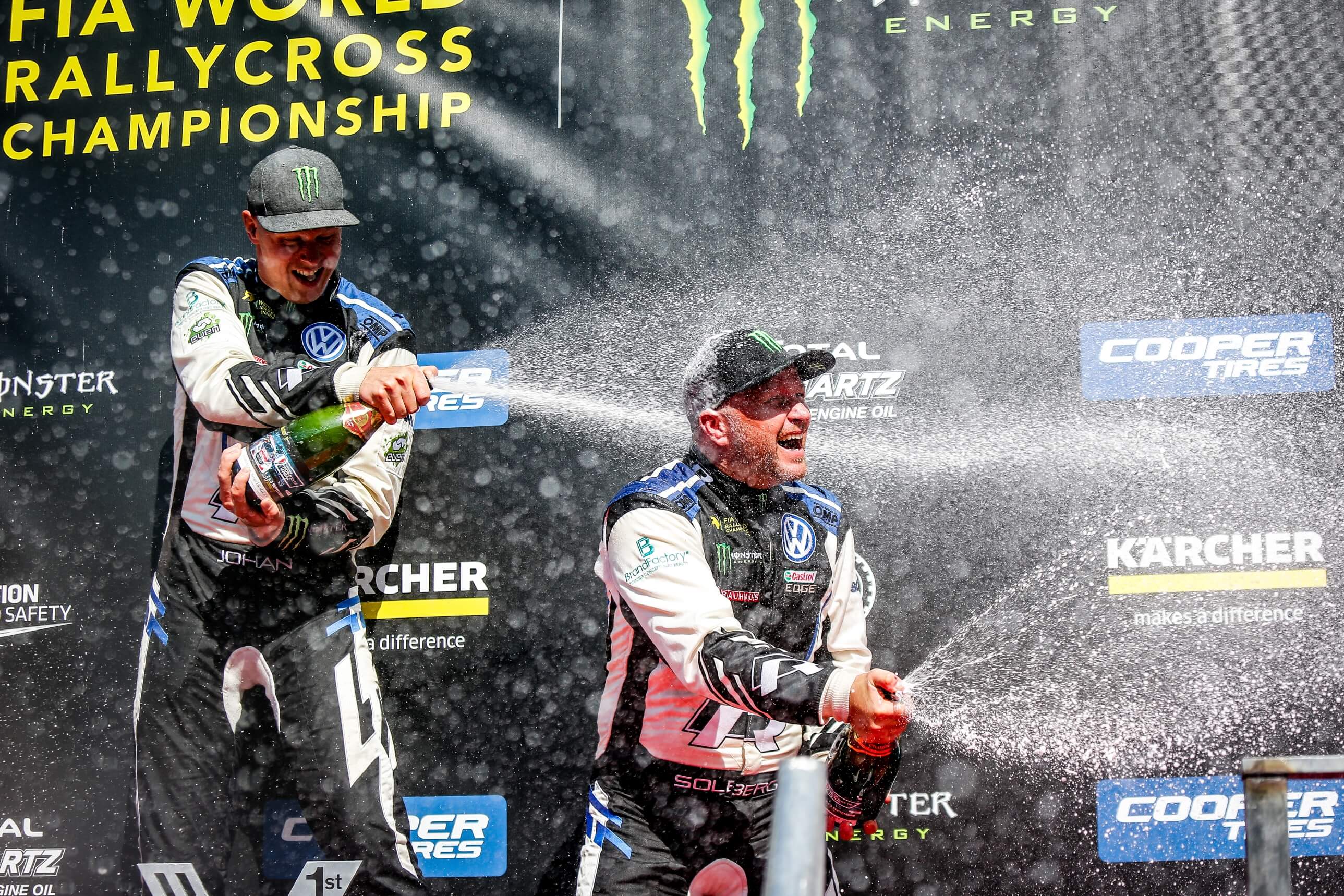