As part of the Speedmachine Festival, the first round of the new Americas Rallycross (ARX) series took place. A few days earlier, we got to know the starting list consisting of 10 players known for their performances at the GRC or national Championships. These were very well-known names, such as Tanner Foust or Timo Scheider. Expectations for the new series were really high. Did the organizers and drivers meet expectations?

As expected, the best times in training were scored by Tanner Foust, Patrik Sandell, Scott Speed and Timo Scheider. These were times relatively worse than those presented by World RX players. It was, however, the first driver training in history, they still have time for improvements in cars or driving strategies. 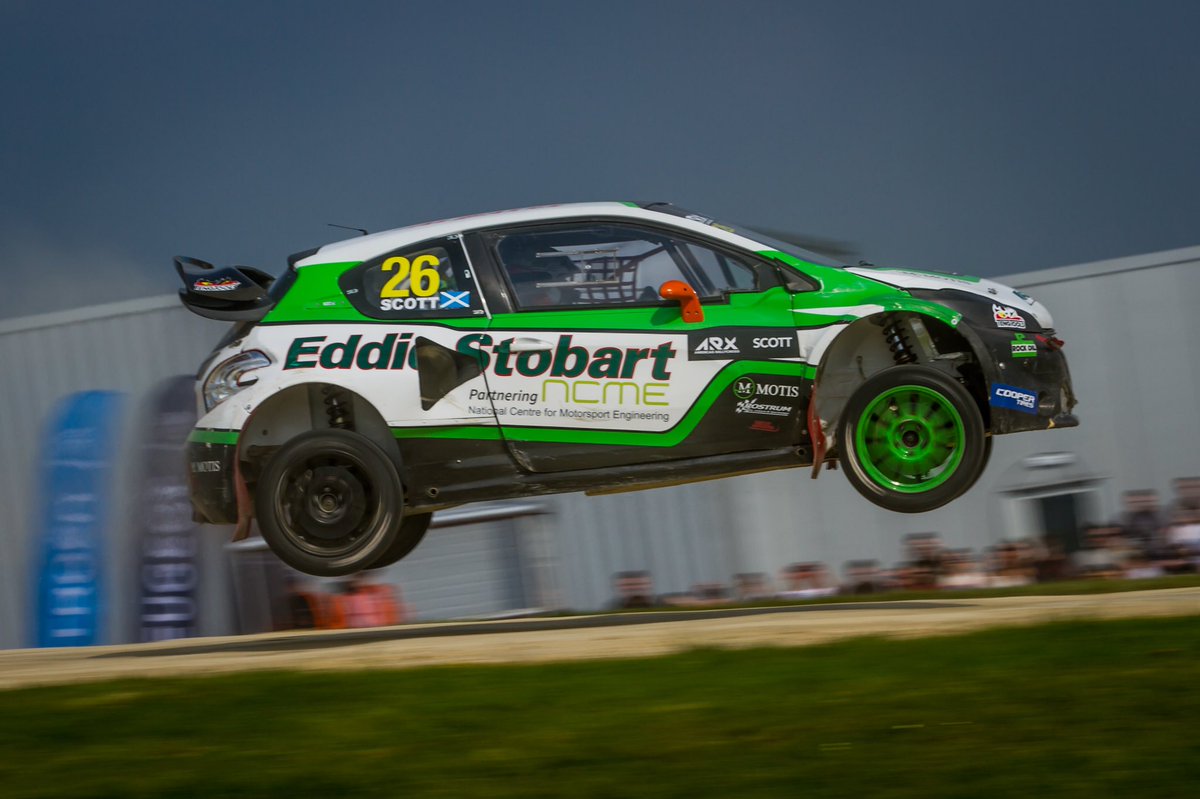 The first two qualifying races were completely dominated by Tanner Foust. The Volkswagen Andretti Rallycross  driver didn’t leave a dry thread on his rivals. Scott Speed showed himself on the good side during training as well as the first qualification. Problems appeared during Q2, which ended in 8th place. Behind Foust, the finish line was crossed by Rene Munnich and Patrik Sandell. Two qualifying rounds – Q1 and Q2 showed that everything can still happen! The next qualifying runs started the next day. It is worth mentioning that after the first day at the head of the pitch was Tanner Foust, followed by Rene Munnich and behind him Scott Speed. Spot differences of players (except for Foust) were really small. Q3 brought a little surprises! Scott Speed won first place and did not give it to a friend from the team that dominated previous races. Patrik Sandell was third behind the wheel of the Subaru WRX STI. Timo Scheider finished fourth but he announced a sharp fight in the next races. That’s what we had the opportunity to watch on the track! Q4 brought a lot of surprises. Timo Scheider kept his word and finished his run in 1st place. Scott Speed was 2nd and Tanner Foust was 3rd. This resulted in a small mix of scores before the semi-finals and raised the atmosphere in the stands. This was the classification before the semi-finals: 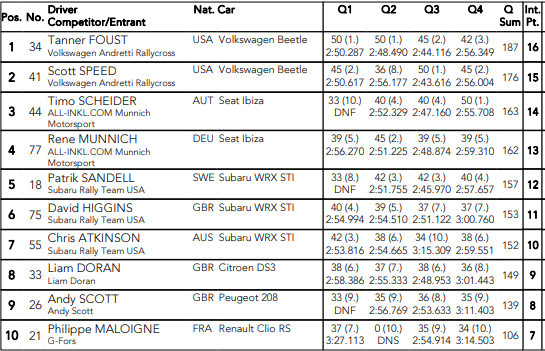 In the first semi-final they went Tanner Foust, Timo Scheider, Patrik Sandel, Chris Atkinson and Andy Scott. In the second semi-final they rode Scott Speed, Liam Doran, David Higgins, Rene Munnich, Philippe Maloigne. Volkswagen drivers Andretti Rallycross won their semi-final races, which guaranteed good start positions in the final. Timo Scheider and Liam Doran also showed their great side. It was certain that they would not give up any opportunity in the finals. One mistake of Volkswagen Beetle drivers could cost them their victory.

Tanner Foust and Scott Speed were seeded in the first line. In the second line Timo Scheider and Liam Doran. In the third line – drivers Subaru or Patrik Sandell and the local hero David Higgins. The favorite of the race, ie Foust, quickly won the first position and did not give it to the whole race. A note of uncertainty brought Joker Lap on the last lap, but he checked in at the finish with a 4-second lead over Scott Speed. The incredible fight was about 2nd place. Liam Doran was not going to let go. Together with Speed they presented a beautiful fair play ride, evading several times (without contact) within a few centimeters. Timo Scheider, who did not finish the final race, showed himself very well at the beginning. 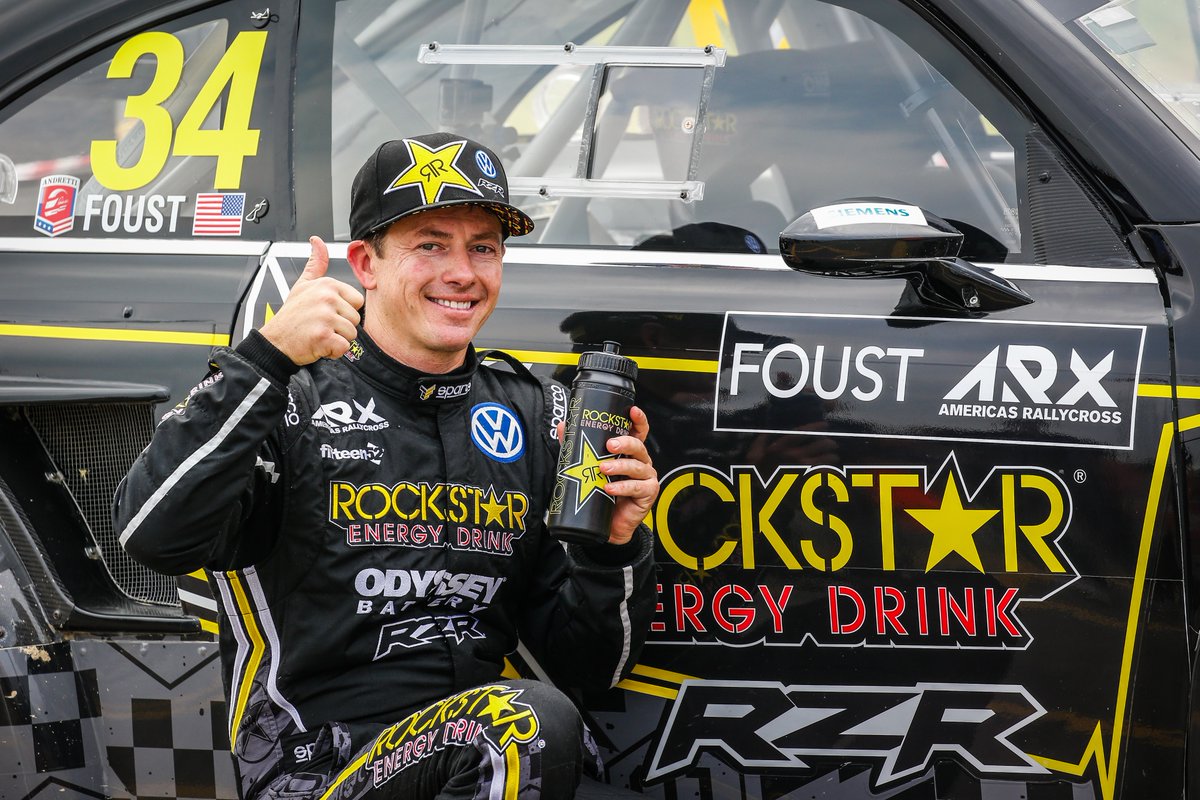 Tanner Foust after winning 1st round of ARX

Tanner Foust after final race: This track is pretty interesting, there’s sections where it got grippy but then it actually polished like dust on top of polished concrete and so it just took a huge amount of discipline and it made it difficult to race side-by-side as we saw; carnage everywhere. It’s a good start and of course having the Andretti [Volkswagen Andretti Rallysport] team over here; I mean I’ve raced over here before but having the Andretti Autosport team over here with this new series is epic. I mean these guys put together a brand new car every single heat and it’s just awesome.