Timmy Hansen regained the lead of the drivers’ championship with victory in an exhilarating penultimate round of the FIA World Rallycross Championship presented by Monster Energy, the Neste World RX of Latvia, on a sodden Bikernierki circuit. It means that an absorbing title battle, which has been awash with drama since the opening round in Abu Dhabi in April, will have its grand finale in Cape Town on November 9-10.

It was Timmy Hansen’s fourth victory in the closest season the championship has ever witnessed with six different winners from nine rounds. The Swede now stands on 187 points, one point ahead of Norway’s Andreas Bakkerud, who led by two points at the start of the weekend. Bakkerud finished third in the Latvian final behind Niclas Gronholm. Kevin Hansen, who followed Bakkerud home in Latvia, is third in the standings on 179.

Anything can happen – World RX of Latvia

Timmy Hansen was in recovery mode en route to the final after dropping as low as 15th place overall after Q1 on Saturday. But the elder Hansen responded to top Q3 and was untouchable in his semi-final.

“It was tough yesterday to be in the position I was in. I’m fully aware of what’s on the line in terms of the championship so I came here wanting to do well. But to have the start to the weekend like I did was tough. The whole team was disappointed yesterday but we all came together and we just kept believing that if we had the perfect day today anything was possible. I tried to focus on what I needed to do, and to drive my best despite all the circumstances I found myself in with the championship situation, the wet track and finishing so low down the order yesterday. This win today really came from the heart. The whole team wanted it and believed we could do it. To sit here after where I was yesterday feels amazing. Now we go to Cape Town. I hope all three of us Andreas, Kevin and myself, have a clean weekend and the best man will stand on top at the end. Whoever can stay strong and keep their head in the game will come out the winner.” – Timmy Hansen 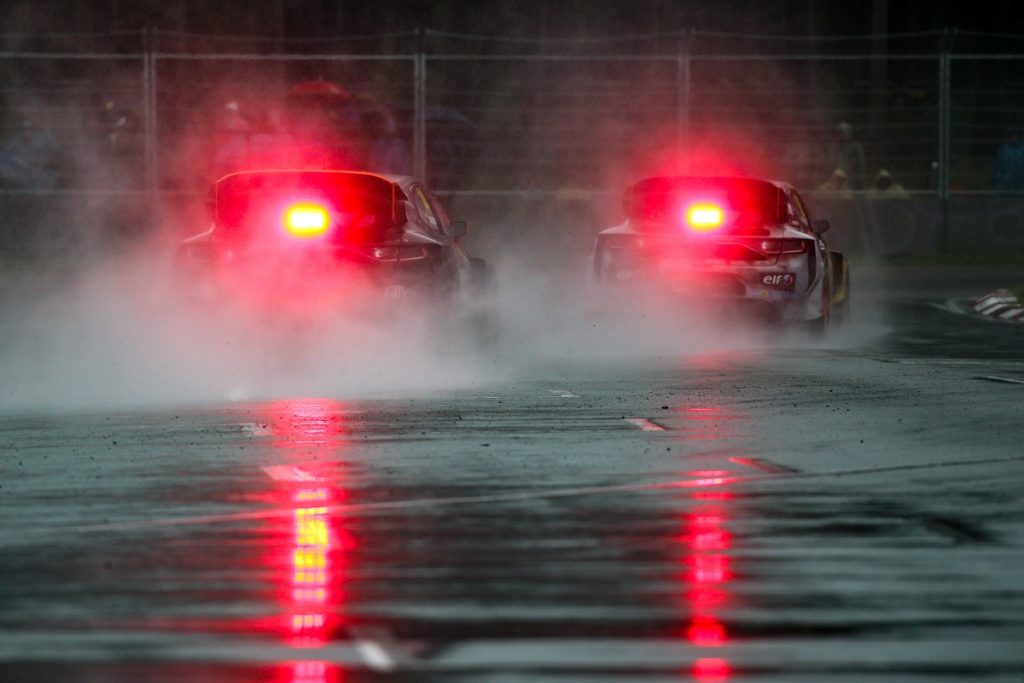 Bakkerud, starting from pole position, didn’t quite have the pace to match Timmy Hansen in the final after his Swedish rival launched his Team Hansen MJP Peugeot 208 in to the lead at turn one.

“I tried my best and was chasing down both Niclas and Timmy from P3 but when you are driving on the edge, as I was, it’s easy to make a mistake. I overshot the jump a little bit and ran wide at turn eight and that was my chance gone. Credit to Timmy, he made a strong fightback after yesterday. Anyway it is good for the fans as they get to see a good show in Cape Town. I don’t think the fight will be over until the chequered flag (in the final) in Cape Town. Both Timmy, Kevin and I know what’s on the line. Now I have the job to chase and Timmy’s the leader so he will be thinking of me for the next eight weeks. So sleep well!” – Andreas Bakkerud

Finland’s Gronholm, meanwhile, felt he had his chances for the victory in a final which took place in wet conditions after persistent rain throughout the second day of the event. “The second lap was good and I felt like I could fight for the win. I started to overdrive a little bit and made a few small mistakes and that was costly in the end” the GRX Taneco driver said. Gronholm’s team-mate Timur Timerzyanov was fifth in the final just ahead of Bakkerud’s Monster RX Cartel partner Liam Doran. There was no fairytale ending for the home fans with Latvia’s Reinis Nitiss in the third GRX Taneco Hyundai i20 and the Team STARD Ford Fiesta of Janis Baumanis failing to progress from semi-final two. It was a similar story for Hungary’s Krisztian Szabo in the EKS Sport Audi S1 who was fifth in the same semi-final. 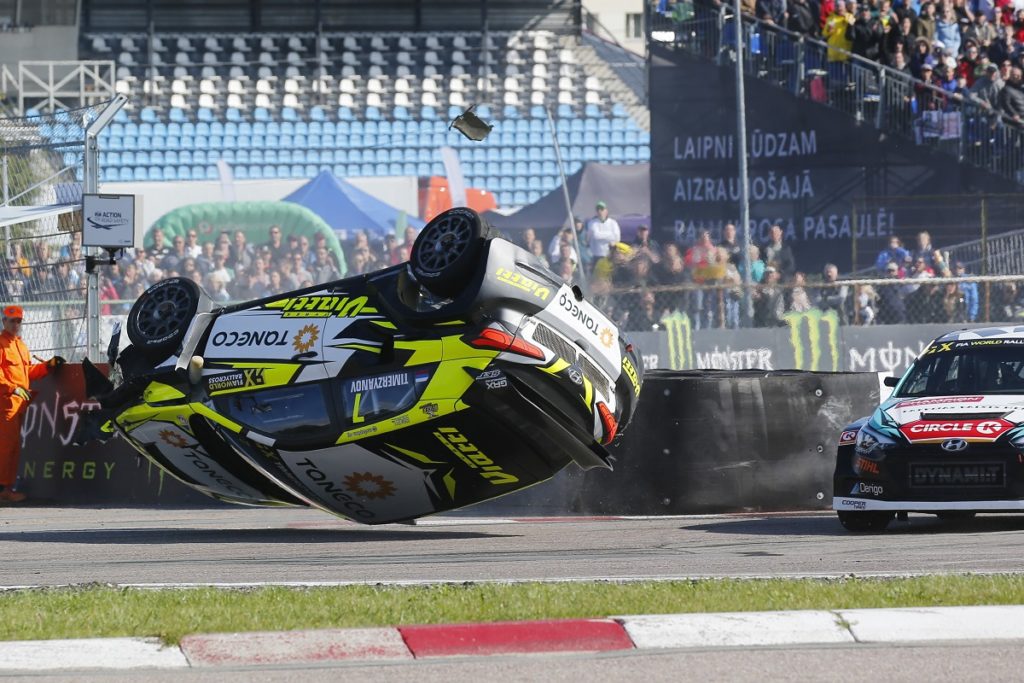 Problems of other drivers – World RX of Latvia

Rokas Baciuska was poised to pick up where he left off at the previous round in Loheac, France by again finishing as the top qualifier after day one. However, for the second successive event, Baciuska’s Renault Megane tangled with the Seat Ibiza of ALL-INKL.COM Muennich Motorsport’s Timo Scheider in semi-final one.

Scheider dropped to fifth place as a result just ahead of his Lithuanian rival as both waved goodbye to their chances of reaching the final. Sweden’s Anton Marklund, who had led the charge for the GC Kompetition squad by putting his Renault Megane in P2 overnight, launched a last-gasp charge in semi-final one but lost out in the battle to the line with Doran. 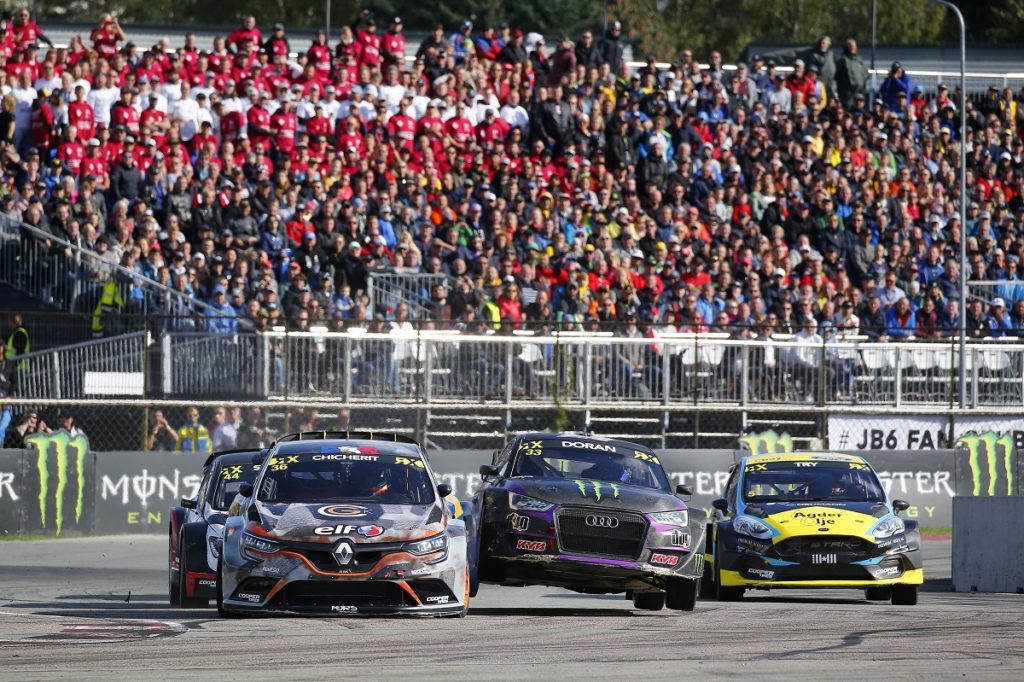 It was a mixed bag for the rest of the GC Kompetition squad. The French team’s boss Guerlain Chicherit started promisingly and reached the heights of P3 after Q3 but was subsequently disqualified from Q2 for “pushing the launch button when the car was in motion”. He eventually finished 15th overall. The GCK Academy pair of Cyril Raymond, who incurred a five-second penalty for hitting the track limits markers in Q4, and Guillaume De Ridder in Renault Clios, were 13th and 14th respectively.

Oliver Bennett in the Xite Racing Mini Cooper was 16th while Matvey Furazhkin, who debuted in the previous round in Loheac, France, made his second World RX appearance in Latvia in the ES Motorsport – Labas GAS Skoda Fabia – finishing 17th.

The weekend started badly for Pal Try, in his third World RX outing of the season. The Norwegian suffered a water pump failure on the Team STARD Ford Fiesta in Saturday morning practice which restricted his track time. He eventually finished 18th. Sweden’s Robin Larsson, the recently-crowned FIA European Rallycross Champion, had an eventful return to World RX in the Audi S1. The JC Raceteknik driver made contact with Timmy Hansen and Szabo in Q1 and was disqualified from the session after he was deemed by the stewards to have “caused a collision”. The penalty dropped him from P7 in Q1 and he eventually ended bottom of the pile overall.