Timerzyanov’s victory came after 64 race starts in World RX. He provided plenty of drama in pulling off two stunning airborne passes over the jump in a pulsating performance en route to the final.

The emotional Russian struggled to find the words to accurately sum up his feelings after his World RX breakthrough.

“I still can’t believe that I have practised for this moment 64 times, it feels unbelievable. This is my life. Every day I wake up in the morning and I only think about rallycross. It’s in my blood. I have been asked to go to circuit racing and I said ‘no’ because rallycross is the only thing I want to do. I love this sport. There’s so much action, so much adrenalin. In the final, I was planning to just hold the guys behind and then at the first corner everything opened up for me. I saw a gap and I thought ‘this is my chance’ and I took it. I really didn’t know what to do when I was leading. It’s the first time I have been there in a final. I just tried to concentrate on my race and control my driving. I had so much fun this weekend, The circuit is really something special and it suits my driving style. You can really fly on the gravel section and going up Eau Rouge is awesome.” – Timur Timerzyanov

It was also the first World RX victory for GRX, the team overseen by former WRC icon Marcus Gronholm.

Bakkerud followed up his third place in Barcelona with another strong weekend in the Audi S1. He had his chances in the final but was delighted that it was Timerzyanov who took the spoils. 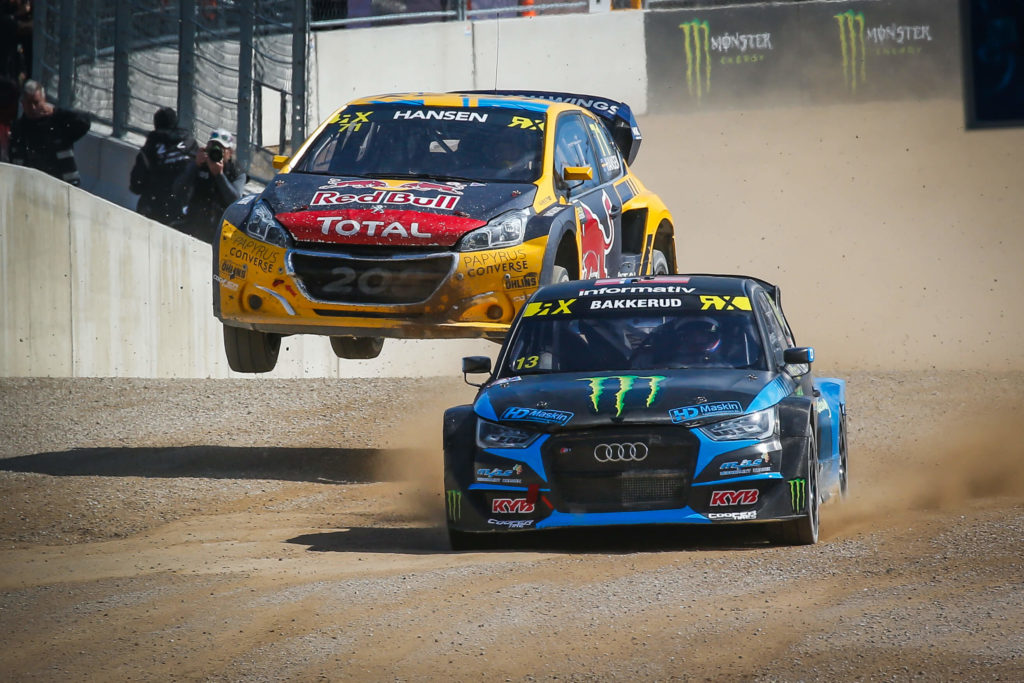 Favorites without victory | Bakkerud and Hansen

“Argentina 2016 was my last win and I had one little finger on the trophy but if there was one guy who I would want to win this weekend if it wasn’t me, it’s my good friend Timur. Of course I would have loved the win but he really deserved it. He is a true character of the sport. My race was OK but I overshot the first turn with Joni (Wiman) and went wide, then I saw Timur’s yellow rocket coming through and that was the end of the story. After a bad start in Abu Dhabi, two podiums in a row feels good. We are finally winning some qualifying heats. We need to take it step by step. We started late getting the RX Cartel together but now we’ve found a much more organised way of working and I’m sure things will continue to improve for us.” – Andreas Bakkerud

Wiman, entered in the event as a wildcard, was drafted in as a late replacement to score teams’ points for GRX in place of Niclas Gronholm, who was recovering from illness. He was the revelation of the weekend in only his second World RX event, his last being four years ago. In the final, the Finn was caught up in the first-corner melee and dropped to last position but recovered with a clever tactical drive.

“This is my second ever world championship event and to get to the podium is a great feeling. I started the weekend quite slowly but went flat out today. After the semi-final win I was quite confident that I could be competitive in the final. I tried to go for the win in the first corner but I got stuck in the wall for a while and I was lucky to recover. A first and third for the team is really nice.” – Joni Wiman

Timmy Hansen, so dominant in Barcelona, at the wheel of the Team Hansen MJP Peugeot 208, was fourth in the Spa-Francorchamps final ahead of Latvia’s Janis Baumanis in the Team STARD Ford Fiesta. Bakkerud’s Monster Energy RX team-mate Liam Doran, despite setting the pace on Saturday, had contact exiting Eau Rouge in the final, came to grief at the Raidillon hairpin and finished sixth. Kevin Hansen bumped door panels with Doran over the jump on the final lap of the first semi-final and was denied a spot in the final by a tenth of a second. The clash resulted in his Peugeot grinding to a halt after nudging the wall at the finish line.

Mattias Ekstrom, the 2016 world rallycross champion battled his way to the semi-final in the JC Raceteknik-prepared Audi S1. However, a coming together with Timmy Hansen at turn one in the second semi-final relegated the 40-year-old Swede to the rear of the field. 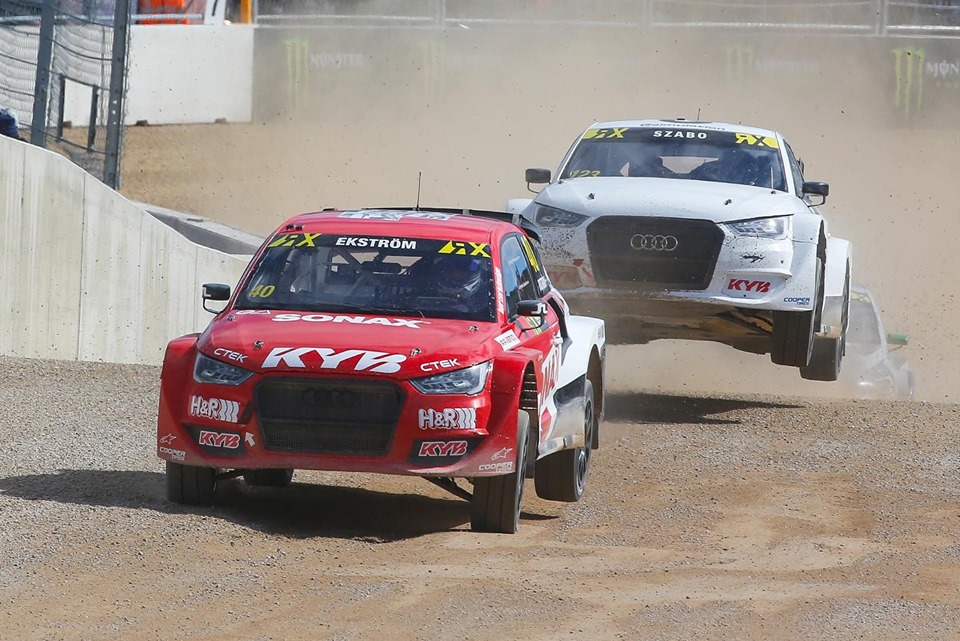 GC Kompetition team boss Guerlain Chicherit was another to engage in aerial combat over the jump – with EKS Sport’s Krisztian Szabo in Q4 – meaning the Frenchman missed the semi-final cut. Fellow GCK team members, Anton Marklund and Cyril Raymond did make it through as did Szabo.

Timo Scheider in the ALL-INKL.COM Muennich Seat Ibiza finished fourth in the first semi-final, just ahead of Szabo.
Xite Racing’s Oliver Bennett took his Mini Cooper to a race win in Q4 but narrowly missed a semi-final spot as did GCK Academy’s local hero Guillaume De Ridder, who was hampered by mechanical trouble in the Renault Clio RS.

The trio of Belgian newcomers to World RX at Spa recorded mixed results despite being cheered on by their raucous compatriots. Enzo Ide in his maiden World RX outing at the wheel of the JC Raceteknik Audi S1 and Gregoire Demoustier in a Peugeot 208 were off the pace most of the weekend. WRC veteran Francois Duval, replacing Rokas Baciuska in the ESmotorsport – Labas Gas Skodia Fabia, had contact with Raymond in Q4 resulting in a DNF and ending his slim hopes of advancing to the semi-finals. Pal Try in the Team STARD Ford Fiesta found the going tough on his return to action after sitting out the Barcelona round but the Norwegian did manage to record a race win in Q3. Frenchman Herve Knapick was at the tail of the weekend race standings in the Citroen DS3. 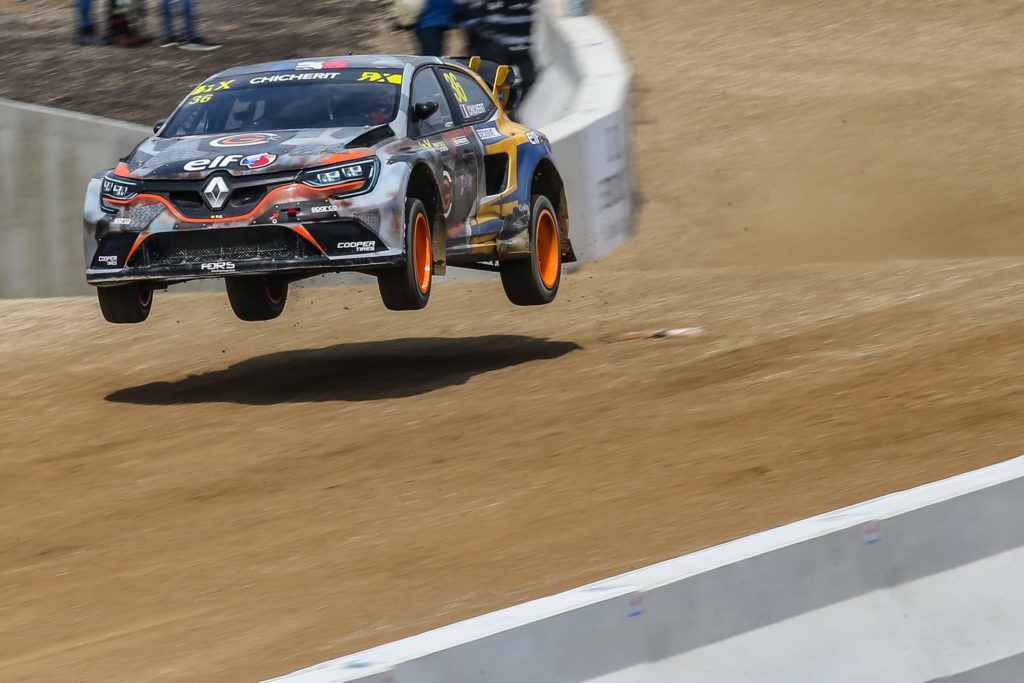 Despite missing the final, Kevin Hansen maintained his championship lead. He is on 69 points with a nine-point buffer to his older brother Timmy. Timerzyanov’s win moves him to third place on 53 points.

In the team’s standings, GRX have closed the gap to one point to Team Hansen MJP with Monster Energy RX Cartel third with 94. After a typically wet and wild day Spa-Francorchamps Saturday, the sun shone on the famed circuit for Sunday’s final. A crowd of over 17,500 turned out during the course of the weekend and a packed grandstand created a gladiatorial atmosphere on final day.