Speed victory on first ARX round in USA

In recent days, the United States has become the capital of rallycross. While the European fans were focused on the last matches of the World Cup, the eyes of motorsport fans were directed at the Circuit of the America in Austin. Drivers raced in two classes: ARX and ARX2. In ARX (SuperCars) class we could see Tanner Foust, Scott Speed, Ken Block, Steve Arpin, Patrik Sandell, Travis Pastrana, Chris Atkinson and Oliver Bennett. Known names are to be one of the ways to interest fans in a new form of competition.

Qualifications – Circuit of the Americas

In the first Q1 race, the Volkswagen Andretti Rallycross team rivals Steve Arpin and Patrik Sandell. The best results were achieved by Scott Speed and Tanner Foust. Everything indicated that they would both fight for the podium during this round. The other drivers took part in the second Q1 race. However, all drivers achieved worse times than rivals from the first race. 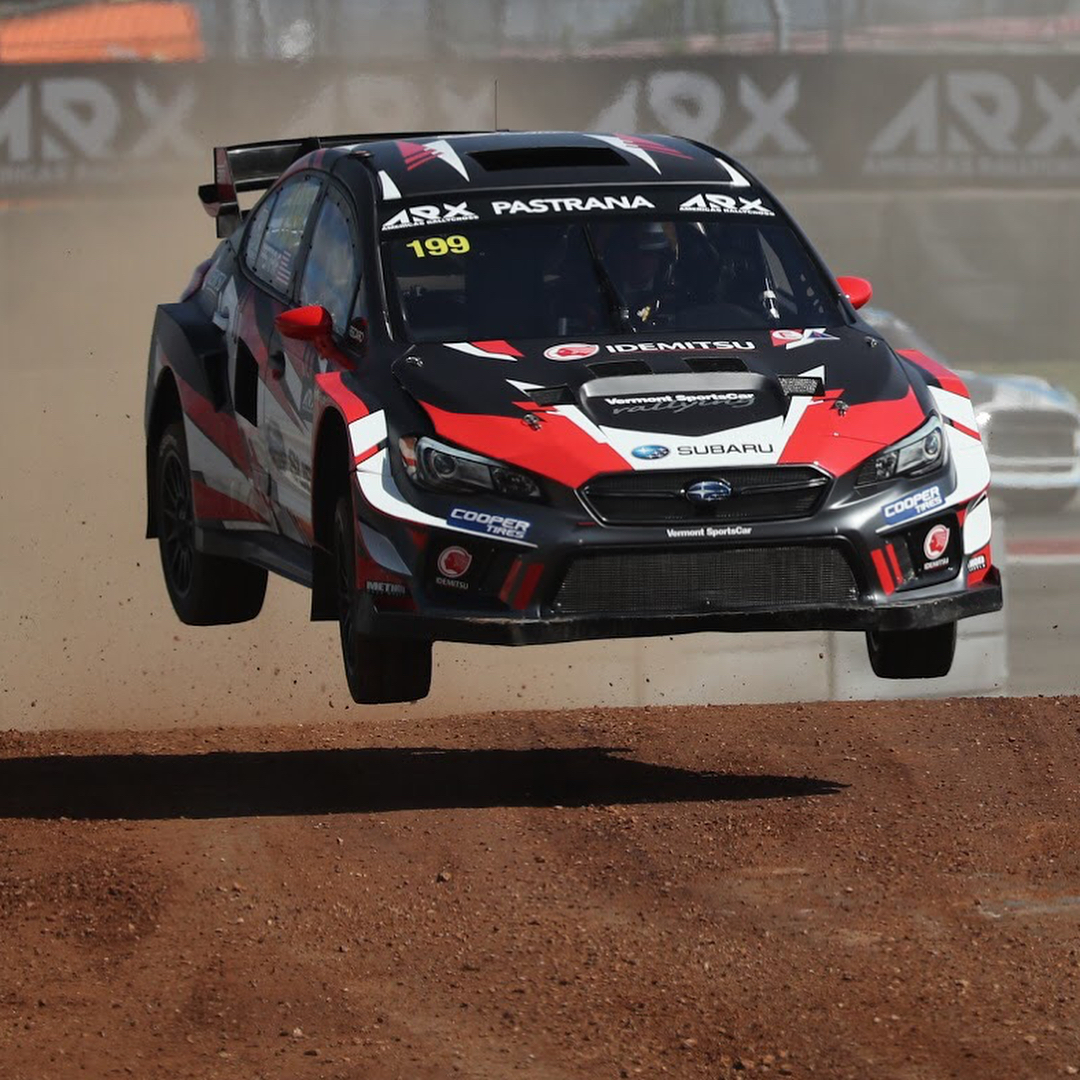 Travis Pastrana – Circuit of the Americas

Americas Rallycross leader Tanner Foust made the best launch in Q2 race two at the Dirtfish ARX of COTA and dived straight into the joker lap at turn one in the Volkswagen Andretti Rallycross Volkswagen Beetle. But it was his team mate Scott Speed who led from the front and again set the quickest time with race victory. The Volkswagen pair were again close at the joker merge on lap four, the same as in Q1, but Speed’s second qualifying victory meant he maintained his position at the top of the overall classification. Ken Block won race one in Q2 with third time of Q2. The Ford Focus RS RX driver took his joker on the final lap to beat a pair of battling Subaru Rally Team USA WRX STIs driven by Australia’s Chris Atkinson ahead of America’s Travis Pastrana. In 3rd race, Patrik Sandell was the best, beating Steve Arpin. Circuit of the Americas was filled with the voices and joy of the fans. 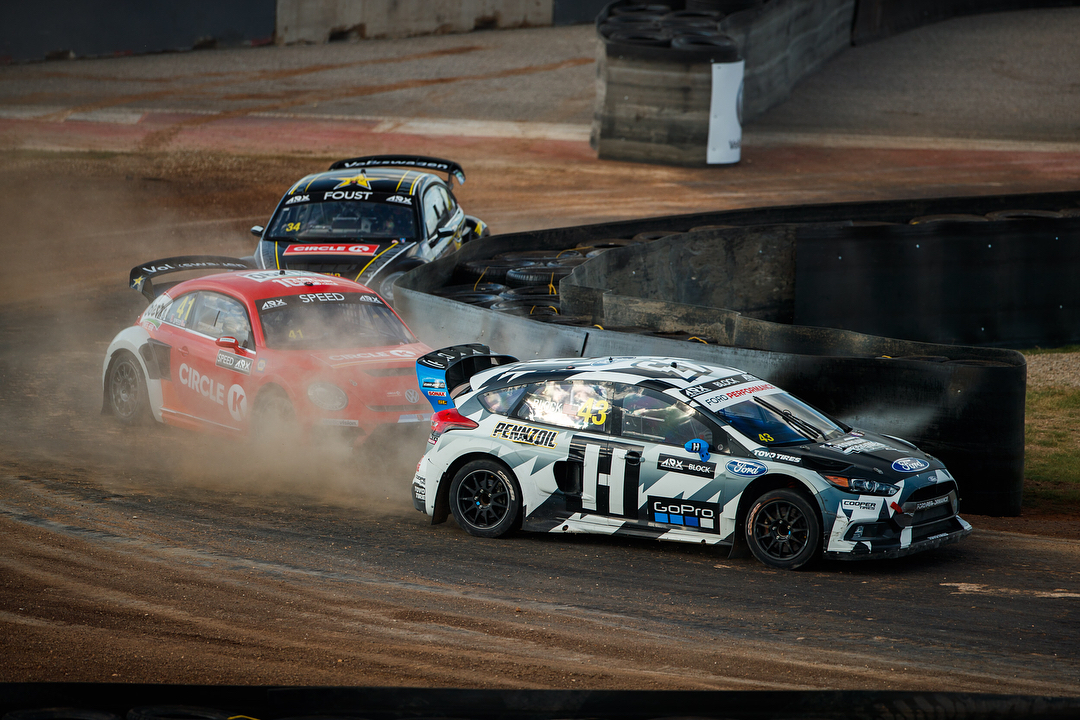 Ken Block and Scott Speed – Circuit of the Americas

After a short technical break and the passing of the ARX2 drivers, Q3 was started. In the first race, Subaru Rally Team USA drivers – Chris Atkinson and Travis Pastrana – presented themselves best. The last was Oliver Bennet, whose car clearly stood out from the rest. However, the driver announced major changes for next season. Will we be getting BMW involved in the rallycross competition? Cooper Mini with factory support could do wonders! In the second race of Q3 we could watch the favorites of the Circuit of the Americas – Foust, Speed, Block and Pastrana. The names themselves make a huge impression, let alone a great driving technique! Foust set a pair of awesome laps in the middle of the race and was side-by-side with his team mate when Speed exited the joker, but again had to settle for second in the searing heat of Austin, Texas for the second ever ARX event on Circuit of the Americas. 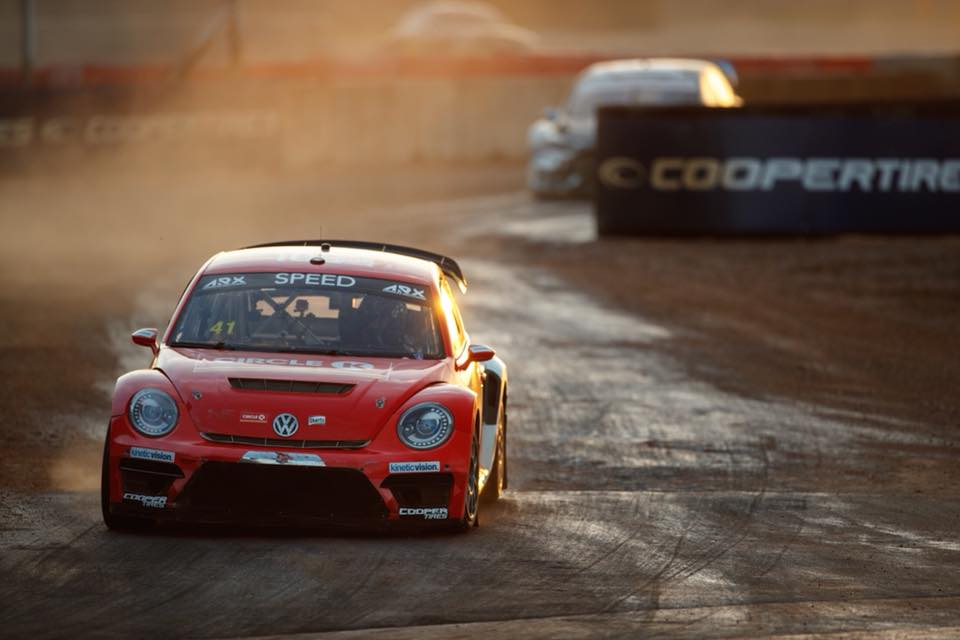 Scott Speed – Circuit of the Americas

After three qualifying runs – Scott Speed was the first, Tanner Foust the second, Ken Block third and Patrik Sandell fourth. Everything indicated that the Volkswagen Beetle drivers would win a place on the podium. Big surprise brought Q4! Tanner Foust finally got a better result than his team-mate. The second time was performed by Ken Block, who presented a very wild and aggressive driving style. The public loves it! We are happy that we can again watch Fors Focus RS RX on important rallycross competitions. Patrik Sandell lost to Block just half a second, thanks to which he reached the third time. The differences between individual races were very interesting. Often it happened that the best times were obtained by the driver from the same race. The competition at Circuit of the Americas was therefore really fierce!

Semi-Finals – Circuit of the Americas

The next stage of the competition were semi-finals. All drivers competed in them. Everyone fought for the place in the last final race. Scott Speed and Ken Block took off from the first line during the first semi-final. Steve Arpin and Travis Pastrana are behind them. At the beginning of the race, Scott Speed achieved the first position. You could see the perfect technical preparation of the car before the start. No one was able to threaten him until the very end. The fight took place between Block and Pastrana. Finally, the Hoonigan driver proved to be better, crossing the finish line as the second. 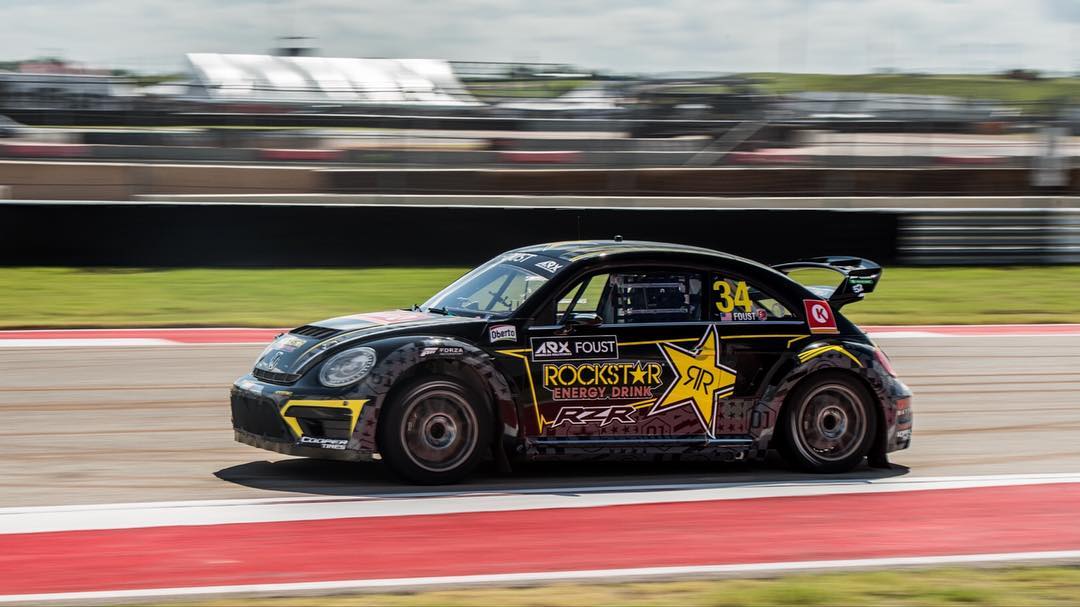 Tanner Foust – Circuit of the Americas

Final – Circuit of the Americas

After long waiting, the time has come for the finale. Scott Speed and Tanner Foust took off from the first line. Ken Block and Patrik Sandell were placed in the second line. Everything indicated that the Volkswagen Andretti Rallycross drivers would dominate the whole race. Tanner Foust entered Joker Lap on the first lap. Ken Block took advantage and took his place behind Scott Speed. During the second lap, not much changed – none of the drivers passed through the Joker Lap, no one has overtaken anyone. During the third lap, Ken Block was forced to cross the Joker Lap. Interestingly, he left Tanner Foust for it. The driver of Volkswagen Beetle had to watch the back of his car and wait for a mistake. However, this did not happen. Scott Speed and Travis Pastrana traveled through Joker Lap during the last lap. Speed was really amazing this weekend and ended the race in well-deserved 1st place. Ken Block took second place. The winner of the previous round – Foust had to settle for third place.

Final – Circuit of the Americas

Scott Speed enjoyed the victory on Circuit of the Americas in the following way: