Scott Speed from Volkswagen Andretti Rallycross’ claimed the inaugural Americas Rallycross (ARX) title at the Circuit of The America. His teammate Tanner Foust fight like gladiator but even maximum points in Texas didn’t help him in winning the competition.

ARX of USA – Circuit of the Americas

In a repeat of Q1, Foust again took the lead of his race in Q2 from the lights going out and set the quickest time to take the day one top qualifier. Loenbro Hoonigan’s Steve Arpin was again second in his Ford Focus RS RX and is second overall. But, Championship leader Scott Speed was spun at turn one in the joker after contact with Ken Block’s Ford Focus. Speed saved the spinning Volkswagen Beetle and finished the race fourth, and was fifth quickest overall. Speed admitted a mistake in taking a second joker in Q1, but Block did the same in Q2. He had first been passed by GC Kompetition’s Liam Doran, the Renault Megane RS RX driver moving inside Block’s Focus at the entry to the second dirt section when Block was trying to pass his team mate Arpin. 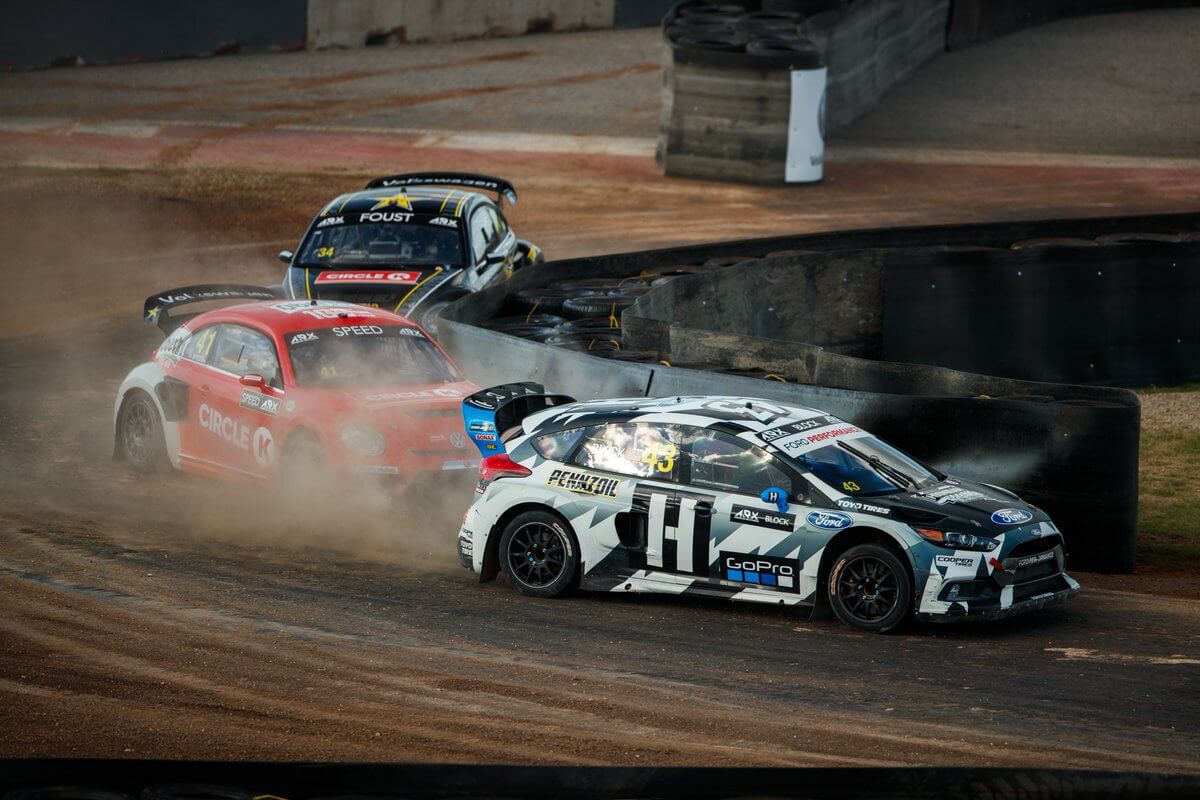 Subaru Rally Team USA’s Toomas “Topi” Heikkinen won Q2 race one after a turn one joker to beat team mates Patrick Sandell and Chris Atkinson and set third quickest time. Topi is fourth at the end of the first day at COTA, behind Doran. Block was ninth quickest in Q2 behind Xite Racing’s Oliver Bennett. Volkswagen Andretti Rallycross’ Speed took the holeshot in Q4 race two and went straight to the joker in front of team mate Tanner Foust and Subaru Rally Team USA’s Patrik Sandell, while Loenbro Hoonigan’s Ken Block was spun in the first corner squeeze after launching from pole position on the inside. Starting fourth on the grid, Foust was deemed to have squeezed the three cars on the inside in the run to turn one and was handed a 10 second penalty. He was seventh quickest but still took TQ (top qualifier) in the Intermediate Classification and closed the gap in the Championship to Speed to eight points with the semi-finals and final set to take place on the Circuit of The Americas this afternoon. 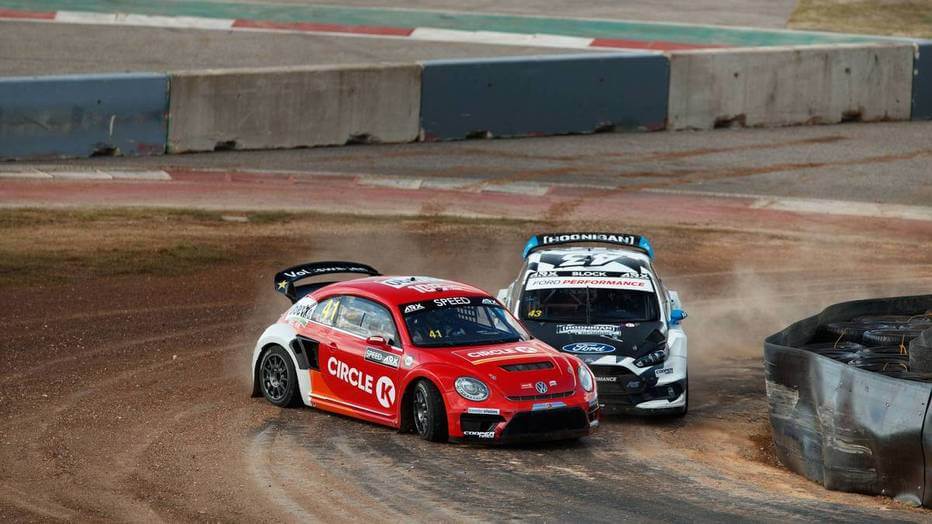 Subaru Rally Team USA’s Chris Atkinson took a lap two joker in race two and was second quickest after Foust’s penalty, Sandell was third and the third Subaru WRX STI was fourth, driven by Toomas “Topi” Heikkinen. Xite Racing’s Oliver Bennett was fifth. GC Kompetition’s Liam Doran Liam Doran won race one, but after contact with Loenbro Hoonigan’s Steve Arpin at turn one, where Arpin’s Ford Focus RS RX was forced into the tyre wall on the inside, Doran was given a 25 second penalty and was classified ninth.

Foust won Semifinal 1 having taken a point out of Speed’s Championship lead at the Intermediate Classification, but by winning Semifinal 2, Speed was assured of the title as long as he just started the final to claim the one point required to be the champion. He did indeed take the start, on the front row alongside pole man Foust and went straight for the joker as Foust took the hole-shot into Turn 1 ahead of Loenbro Hoonigan’s Steve Arpin. In the No. 43 Loenbro Hoonigan Ford Focus RS RX, Ken Block immediately pulled off the grid as the lights went green with a technical issue. 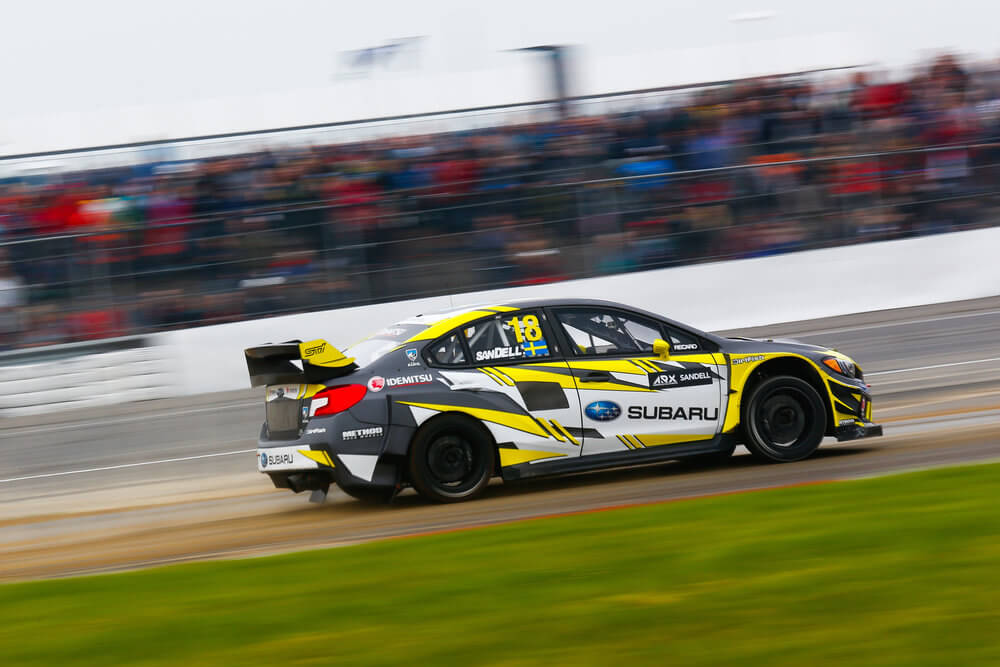 Subaru Rally Team USA’s Toomas “Topi” Heikkinen and Patrik Sandell followed Speed into the Turn 1 joker, Sandell making a last moment change of decision to take the non-standard line. Arpin took his joker on the third lap and was passed by Speed, but held onto third. Foust then took his joker on Lap 4 but held onto the lead to take his second win of the inaugural ARX season. Speed finished second and Arpin claimed his first ARX podium in third. Heikkinen finished fourth in his debut for Subaru Rally Team USA and Sandell finished fifth in the last round and third in the championship point standings. Subaru’s Chris Atkinson and Xite Racing’s Oliver Bennett had a first-lap-fight in Semifinal 1 and GC Kompetition’s Liam Doran had a battle with Sandell in Semifinal 2 but finished the race with a puncture.

Scott Speed and Volkswagen Andretti Rallycross (VARX) become the first team and driver champions in ARX. This is the fourth driver championship in rallycross, in a row, for Speed and the team’s fourth collectively.

Scott Speed on winning the 2018 ARX Championship:
“I came here this morning thinking, ‘well I still have two qualifiers, I can make up some points’. I knew I had nine points to play with, but after Q3 I pretty much gave all of them back. We were sitting in seventh. I thought something crazy needed to happen to throw away nine points this weekend and it was happening. I went into Q4 with Tanner [Foust] to my right on the outside thinking ‘I cannot see how this is going to work out’. I’m just going to try and get off the line as quickly as possible and I hope he gets a bad start. I actually pulled the fastest launch we’ve ever had. I was able to go along the outside of him into the joker and then we controlled our fate and I was also lucky that no one followed the leader on the normal track and they all got jumbled up. I had reign to put down fliers and took P1 in that qualifier which turned the table from going completely ‘oh my god, are we really losing this?’ to ‘oh man, all we need to do is win our semifinal from pole and we got it’. It was a huge emotional roller coaster this weekend and those are the best. That’s why we do it. That’s why I come to work every day to live for these moments and you don’t know when they are going to come, but for us that was Q4.”