Finland’s Niclas Gronholm finally claimed a maiden victory in a pulsating final – and dramatic aftermath – to the Team Verksted World RX of Norway. The fifth round of the FIA World Rallycross Championship presented by Monster Energy, taking place in the aptly-named Hell, certainly lived up to its billing.

A torrential downpour just prior to the start of the semi-finals made track conditions treacherous with rivers of water forming on the surface and teams switching to full wet weather tyres. Grip levels were a guessing game, particularly off the start line and through the tarmac sections of the 1019 metres of old school rallycross track. Strong winds added to the occasion. By the time of the final, the rain had eased slightly but conditions remained hellish for the drivers.

The finale is the essence of rallycross

At the finish to the final, the top three over the line read … Anton Marklund, Kevin Hansen and Gronholm. However, the turn of events thereafter caused a major reshuffle of the pack. GRX Taneco’s Gronholm was promoted to the victory after a post-race scrutineering check found that Marklund’s GC Kompetition Renault Megane RS was not in compliance with the technical regulations. The Swede was disqualified from the event as a result.

Earlier, Gronholm had displaced Kevin Hansen after the Team Hansen MJP driver received a one-second penalty for unsportsmanlike behaviour. Gronholm, himself, received a reprimand for a similar offence in the final. Gronholm, who missed the Belgian and British rounds with illness, returned with a vengeance by talking the top qualifier position after Q4. The Finn was disadvantaged by starting on the front row in the final where the track surface carries more rubber – hence less grip in the wet.

“It feels nice to have a win but this is not really how we expected it to happen. We had a really poor launch from the front row in the semi and the final. I tried to push Kevin (Hansen) all the way in the final. I think his rear bumper is quite bruised. The car felt good, we definitely had the pace to win but the wheel spin off the line hurt us.” – N. Gronholm

There was also déjà vu of sorts in the night air in Norway. At the opening round in Abu Dhabi, Kevin was awarded the win after Gronholm was on the wrong end of a stewards’ decision having taking the chequered flag ahead of his Swedish rival. The positions were reversed as a result. As for Norway, Kevin felt the decision was fair. “It could have been a lot worse, so I think they (the stewards) did a fair job and I just have to accept it,” he said. 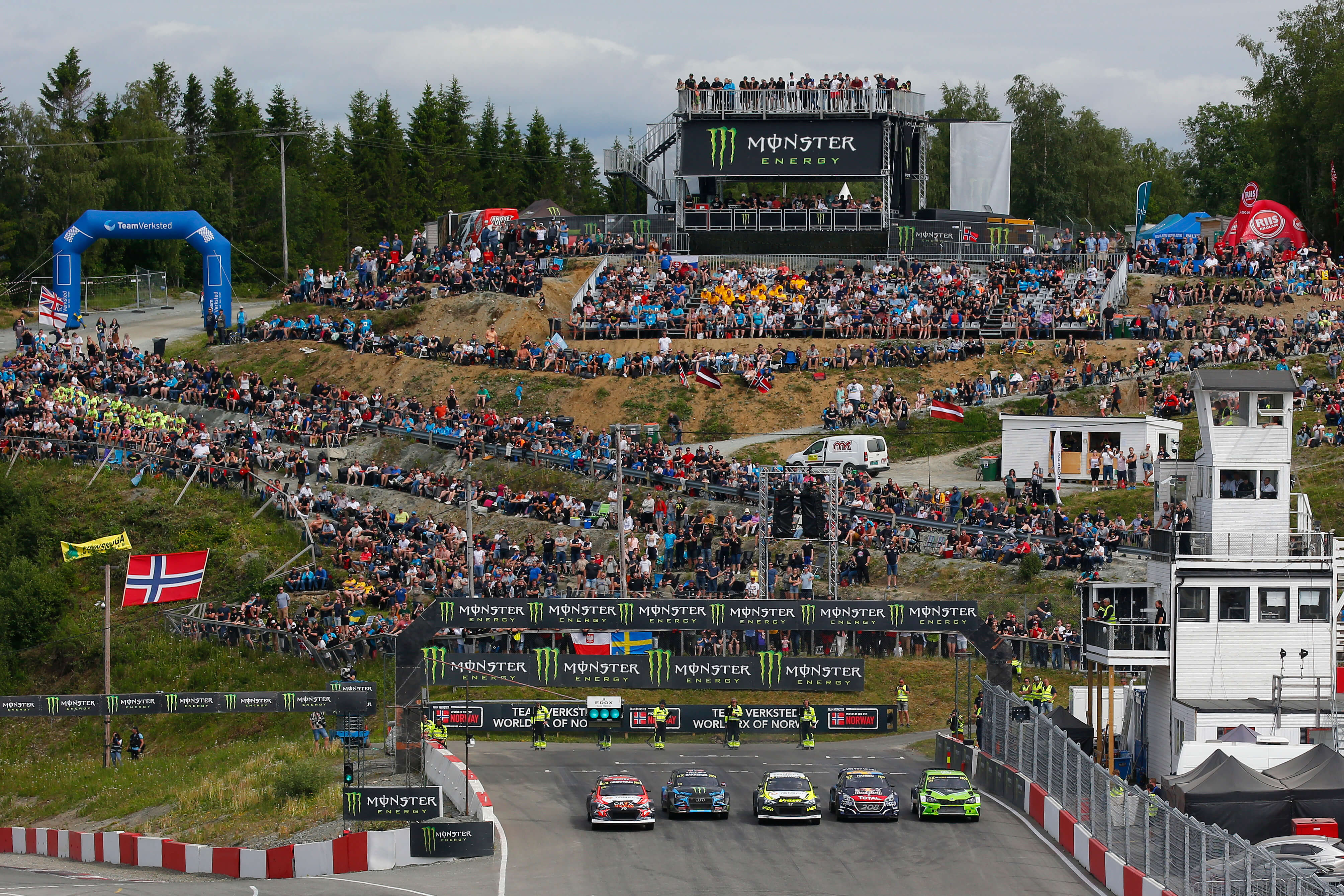 Kevin had earlier pipped his brother Timmy for a final spot in their semi-final as their Peugeot 208s merged after the joker lap.

“This is the most crazy rallycross racing I’ve ever experienced. Racing in these conditions with a flood of water on the circuit is really difficult. I raced side by side with Timmy at the end of the semi-final but it was fair. He gave me some tips for the final which helped. Overall we did a great job in the wet. We made good changes to the car and I had an amazing spotter in the final to coach me all the way through because it was difficult to see at times. I feel like I can speak about this final forever as so many things happened. We grabbed some good team points and we are still one-two in the championship which is what we wanted when we came here” – Kevin Hansen

Latvia’s Janis Baumanis recovered from damaged suspension in the Team STARD Ford Fiesta in Q1 to advance to the final where he inherited third – his first World RX podium. In fourth, on a stunning World RX debut, was Dutchman Kevin Abbring at the wheel of the ESmotorsport – Labas GAS Skodia Fabia. Liam Doran, having taken the lead in the final, appeared to be heading for his first World RX win when a mechanical issue slowed his Monster Energy RX Cartel Audi S1. He ultimately took fifth place from the final. The Briton had reached the semi-finals in Hell as the beneficiary of the disqualification of Rokas Baciuska, making his debut in the GCK Academy Renault Megane RS RX. 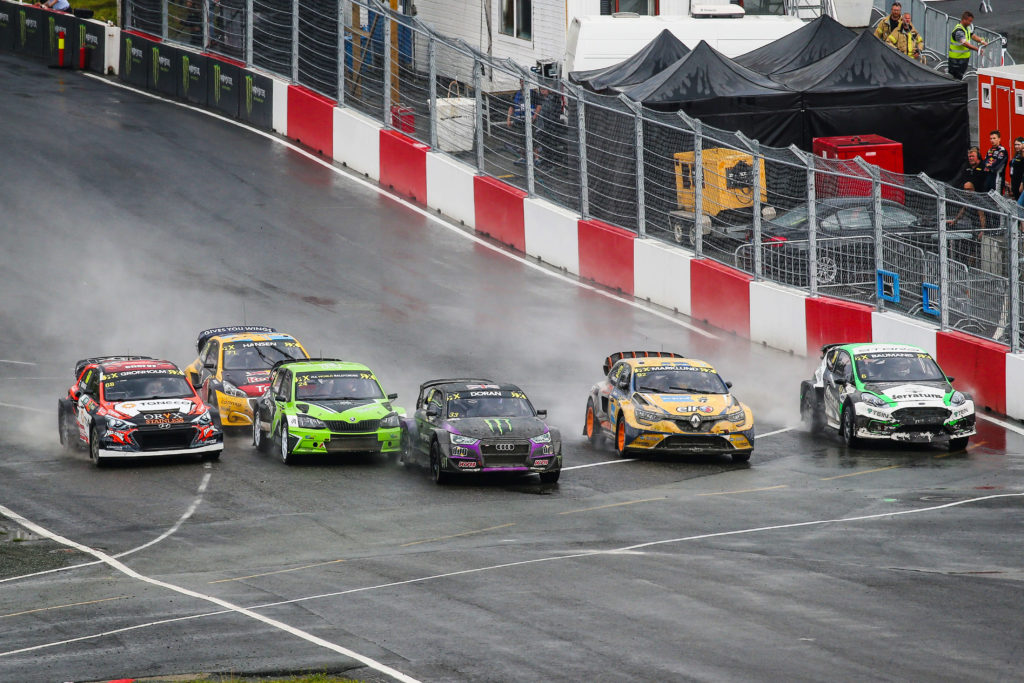 The Lithuanian was deemed to have touched the launch control button during the lap of a Q3 race after a review of data by the stewards. Doran was mighty in the soggy semi-final two and looked set for a repeat in the final before the gremlins intervened. His team-mate and home town favourite Andreas Bakkerud failed to reach the final to the massive dismay of a strong contingent of local fans. While disappointed for himself, the home supporters and local organisers, the Norwegian also felt for Doran. “While I am sorry for my fans and the whole of Norway, I am also very sorry for Liam. I honestly thought, as most people did, that Liam would give the RX Cartel our first win today but it wasn’t to be,” he said. Gronholm’s GRX Taneco team-mate Timur Timerzyanov had put his Hyundai i20 in third place after Q3 but could only manage fourth in his semi-final.