Swedish wildcard Sebastian Eriksson won a pulsating final of the Swecon World RX of Sweden, the sixth round of the FIA World Rallycross Championship presented by Monster Energy. A weekend crowd of over 48,000 turned out at Holjes Motorstadion for the Magic Weekend, a highlight of the world rallycross calendar. Although heavy rain in the early part of the day made track conditions challenging for the qualifying rounds, the leaden skies gave way to brilliant sunshine and a dry track for Sunday’s afternoon’s final.

Olsberg MSE is back in bussiness

Eriksson, who combines engineering and mechanic duties for the Olsberg MSE Team, was making only his fourth appearance at World RX level. In a previous round at Holjes in 2014, he led the final only to be thwarted by mechanical failure with the finish line in sight. Today he atoned. The 26-year-old Swede Eriksson started the final from pole in his Ford Fiesta having won his Q4 race to set the fastest time in the final round of qualifying races. The victory lifted him to P2 overall and secured pole position for the second semi-final which he also won. 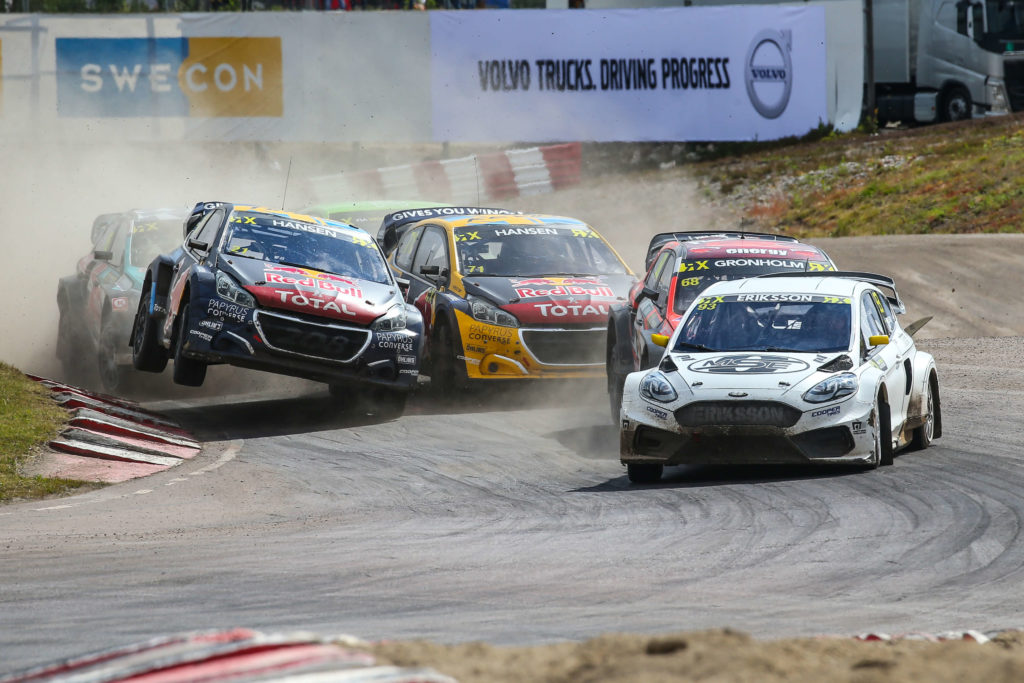 Eriksson, who lives an hour away from Holjes in the forests of Varmland, had previously competed in a Nordic RX event as preparation for this weekend but to take a convincing victory in a step up in class to world level against the best drivers in the sport was an astonishing achievement.

“It’s so special to win here. This is the race every rallycross driver wants to win so to come here and be able to win it is just amazing. It’s over a year and a half since I have been in a Supercar so it’s been a long time coming. Holjes is very special. The atmosphere around the track is like no other venue I’ve been to, and the race track itself is the best rallycross track there is.”  – S. Eriksson

Eriksson, whose Fiesta was slowed towards the end by overheating, was hunted down by Team Hansen MJP’s Kevin Hansen on the final lap but held his nerve to take the chequered flag.

“I was leading the final, I started losing power and I could sense the pressure but I just tried to keep it tight and not leave the door open for Kevin. I knew Kevin was going to push me hard all the way to the line but I managed to keep it tight. The team has done a fantastic job with the car. I didn’t think we would be this competitive but from Q1 the pace was good. After this win, it’s looking good for the future. As for doing other races this year, we will have a meeting next week to plan what we do.” – S. Eriksson

Hansen brothers are in the lead

Despite a last-corner lunge, Kevin Hansen had to settle for second in the final. In doing so, he took over the lead of the drivers’ championship from his brother Timmy who trailed off in last place after a puncture in the sister Peugeot 208. Kevin now leads the standings on 131 points – six ahead of his elder brother. The brothers took sibling rivalry to new levels of competitive spirit in their semi-final with Kevin emerging the winner after trading bodywork blows on several occasions. 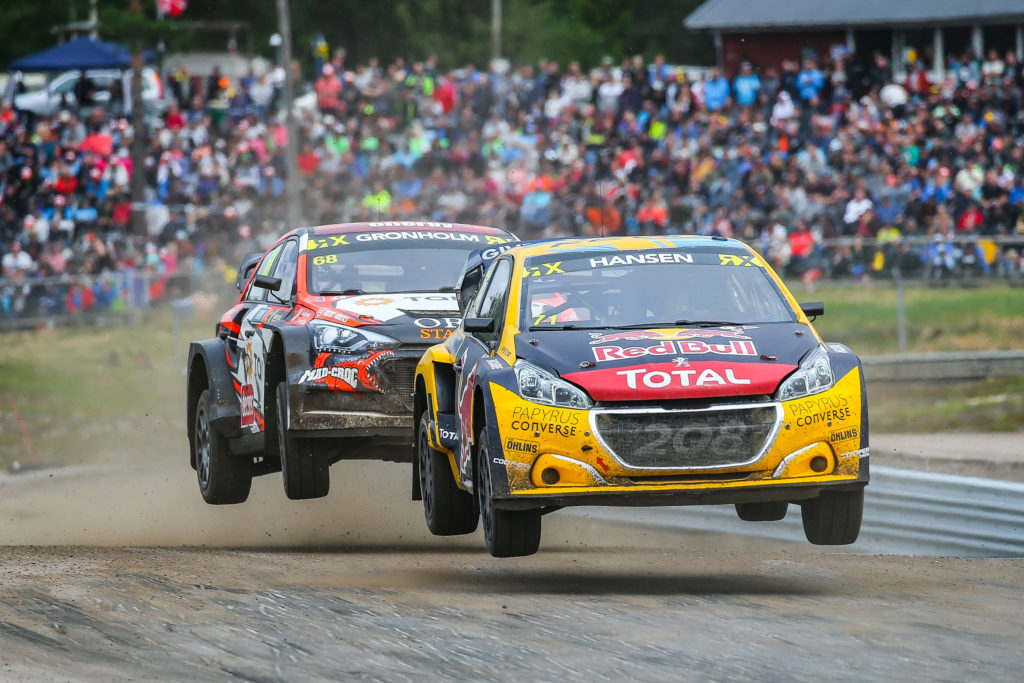 Hansen brothers during the fly

“The whole weekend has been pretty crazy to be honest. Having changeable weather in the qualifying stages made things difficult. I had a good battle with Timmy in the semi-final and managed to come out on top which was important for the front row start for the final. In the final I pushed Sebastian really hard. On the final lap I was on his bumper and looking for somewhere to overtake as I thought he had a puncture because he had slowed a bit. In the last corner I thought ‘OK, this is it’. I stuck my nose up the inside in the middle but realised I couldn’t make it, so I backed down. Anyway, P2 at home feels amazing in the end with some good points for the championship. It was a really cool event and great weekend.”

GRX Taneco with another podium

In third place was Reinis Nitiss who staged a remarkable comeback after rolling his Hyundai i20 in Q1 on Saturday. The GRX Set team worked wonders to get their man out for Q2 where he took a race win and fastest time. A third place in the semi-final secured his passage to the final. It was the Latvian’s first drive in World RX since competing in the opening round in Abu Dhabi. The World RX part-timer struggled to contain his emotions afterwards. 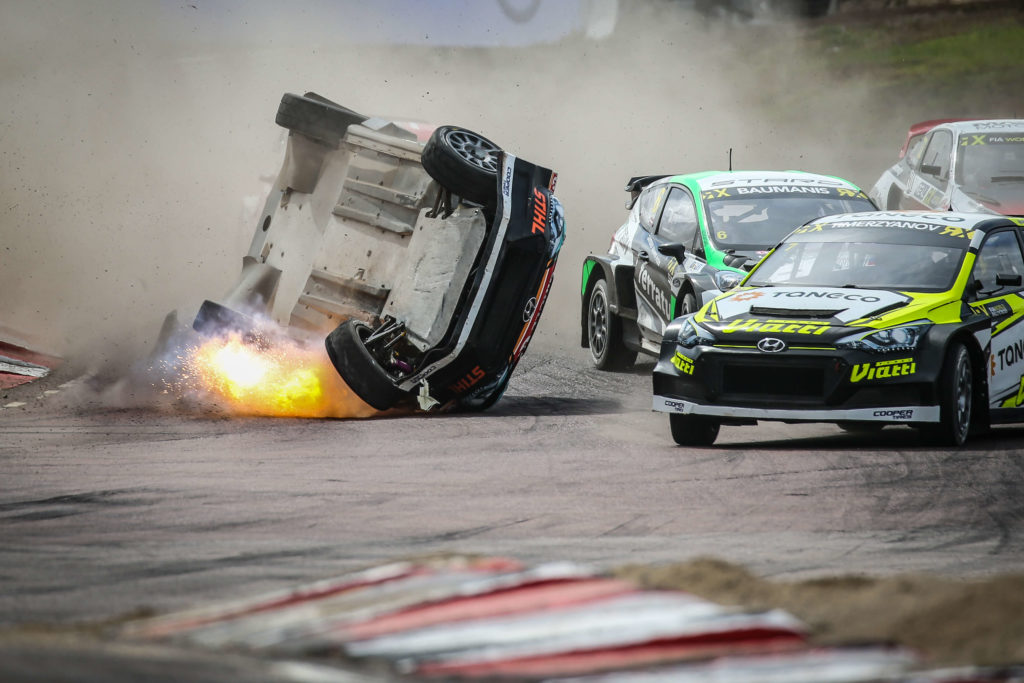 “After rolling the car in qualifying, the first roll in my life, on the most famous rallycross track, I jumped out of the car and thought ‘maybe I need to stop with this sport. But all the mechanics and everyone in the team did an amazing job and people around me helped me get my self-confidence back for Q2. I won in Q2 and got back in the game. We were so far down but we bounced back. And that’s why we go racing; for the emotions we get. To imagine being on the podium after the trouble in Q1, I just didn’t believe it was possible. This is the Magic Weekend in Holjes. Maybe magic happened for us. There is my home race in Latvia later this year which I really want to be at. I will do everything I can to be there.” – R. Nittis

His GRX team-mate Niclas Gronholm, the winner last time out in Hell, Norway, brought his Hyundai i20 across the line fourth but was relegated to fifth after incurring a five second penalty for track limit infringements. GRX’s Timur Timerzyanov and ALL-INKL.COM Muennich Motorsport’s Timo Scheider were disqualified from Q4 for track limits infringements and failed to make the semi-finals.

In a reference to his disqualification for touching the track limits pole, Timerzyanov, who had wins in Q1 and Q4 and looked to be heading to the semi-finals, commented: “With the track wet and slippery it makes driving unpredictable and there are going to be mistakes. I understand that if you hit a tyre barrier then that is a penalty but touching the track marker poles doesn’t give you much of an advantage”.

Kevin Abbring, in only his second World RX event in the ESmotorsport – Labas GAS Skoda Fabia, thus inherited fourth place. Andreas Bakkerud, third in the standings on 109, conceded ground to the Hansens when his Monster RX Cartel Audi S1 suffered a broken driveshaft while leading his semi-final. “It could have been a great final, the car felt good and we had the pace. It would nice to finally give all of our partners and supporters a win, but it wasn’t to be.” Monster RX Cartel team-mate Liam Doran endured a torrid weekend – much of which he admitted was of his own making. “Overall I made too many mistakes. To compete at a level like this especially here where there are 25 cars entered, you can’t afford to make a mistake because it costs dearly. I was trying to react to the mistakes I was making and trying to find the time back but you can’t find it, everyone is so fast. I had a bit of bad luck with a puncture in Q1, I made a mistake in spinning off the track in Q2 and then in Q3, I was too greedy in the first corner and got pushed off.”