Norway’s Thomas Bryntesson recorded his first FIA European Rallycross Championship victory of the season at the standalone Euro RX round four, presented by Monster Energy, at a sodden Estering in Germany. The TBRX driver took his Volkswagen Polo across the line ahead of championship leader Robin Larsson, of Sweden, with Germany’s Rene Muennich third. Bryntesson started from the front row in the final alongside pole-sitter Larsson and was able to dominate the race after a good launch off the line and a safe passage around the all-important turn one. Heavy morning rain had made track surface at the famous Estering circuit treacherous. By the time of the final, the rain had eased but Bryntesson was able to master the tricky conditions nonetheless despite suffering a puncture during the final.

The Norwegian had finished second at the opening round in Great Britain, third at Hell, Norway and seventh after a bout of engine trouble in Sweden.

“I am super happy for the team because we have been working really hard. It’s the first season in Euro Supercar for the team and it’s all new so to get a win here at such a famous track like Estering feels really good. I got a really good start and good traction out of the first corner which is really important at Estering. I just tried to spare the tyres because the track was drying up a little. I got a puncture just before the joker lap so I had to use the handbrake to get in to the joker but it worked out well and we got the win. We lost a lot of points in Holjes with the engine failure but to score some good points here is important for the championship.” 23-year-old Bryntesson

Larsson, who had an unblemished record heading to Germany after wins in all three opening rounds, had set the weekend pace through qualifying and posted a dominant semi-final win and looked set to continue the winning sequence. However, the Swede struggled to get off the line cleanly from pole position in the final in his JC Raceteknik Audi S1 and despite hounding Bryntesson in the early stages, could not get the better of the Norwegian. 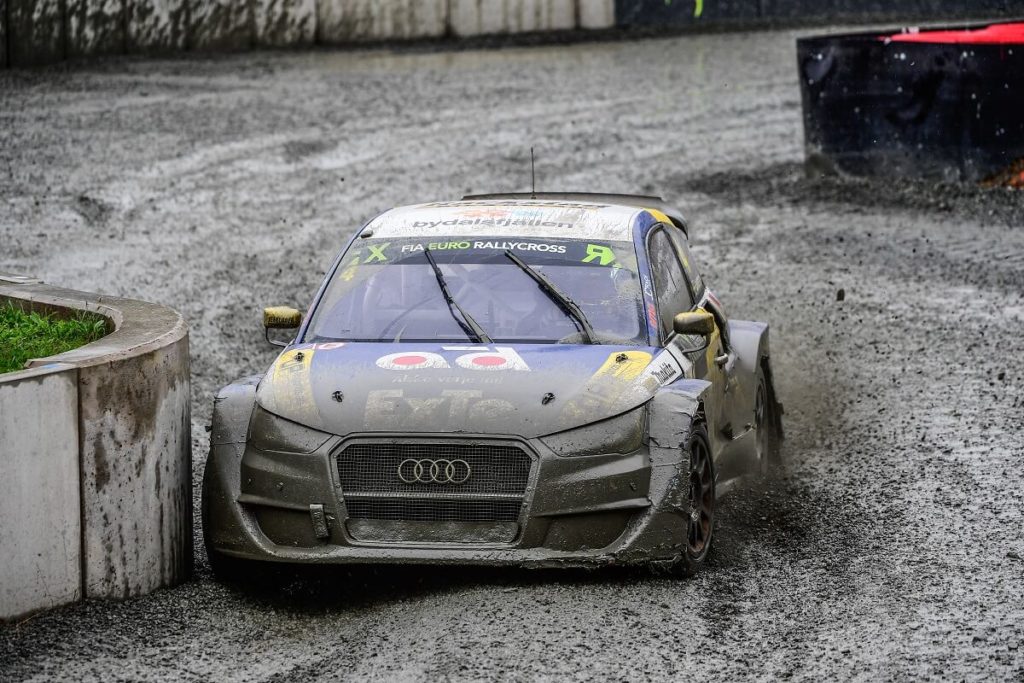 “Of course you always want to win but I don’t think we could do much more in the final. It was really slippery and (Thomas) Bryntesson is a really good driver so P2 and almost maximum points is good for me.The start is really important here and I was on pole in the semi and the final and I couldn’t get good traction off the line. We’ll review the whole race weekend and analyse it closely and we’ll come back stronger in France.”  R. Larsson

Munnich, the team boss of ALL-INKL.COM Munnich Motorsport squad, was delighted to secure a podium finish on home ground in his Seat Ibiza.

“It’s a great feeling to get a podium after 12 years of rallycross here in Germany” he said. “There was a lot of support for me and the team here so it was good to give the fans something to cheer about. The track was difficult because the conditions were changing all the time. Really wet, then drying but very slippery in some parts. We were not sure what set-up we should use or what tyres we should use. But in the end it was the same for everyone. I am so pleased to finish the weekend on a good note.” – Munnich

Fourth was Sweden’s Pontus Tidemand who had a mixed weekend in the Eklund Motorsport Volkswagen Beetle. He was P4 after day one but dropped to P10 after Q3 when he stalled the car at the start but still managed the win in Race 2. In Q4, he had a spin at the exit to turn one and eventually scrambled in to the semi-finals in P10. Again, he struck trouble in semi-final two getting turned around into turn one and dropping to the back of the order. He produced yet another stunning recovery just to reach the final.

Fifth was Peter Hedstrom in the Hedstroms Motorsport VW Polo despite jumping the start and incurring a double joker lap penalty. The Swede finished just ahead of Jean-Baptiste Dubourg’s Peugeot 208. Larsson maintains his lead of the championship on 117 points. Bryntesson’s victory took him to a clear second on 95 ahead of JB Debourg on 83 and Munnich on 70. Tamas Karai looked set to challenge for honours in the final but had a messy semi-final which ended with his Audi A1 contacting the barriers at turn one dropping the Hungarian to last place in his semi. Munnich’s German team-mate Mandie August reached the semi-final as did the younger of the Dubourg brothers Andrea along with Lithuania’s Paulius Pleskovas, Norway’s Sondre Evjen and Mikko Ikonen, of Finland. 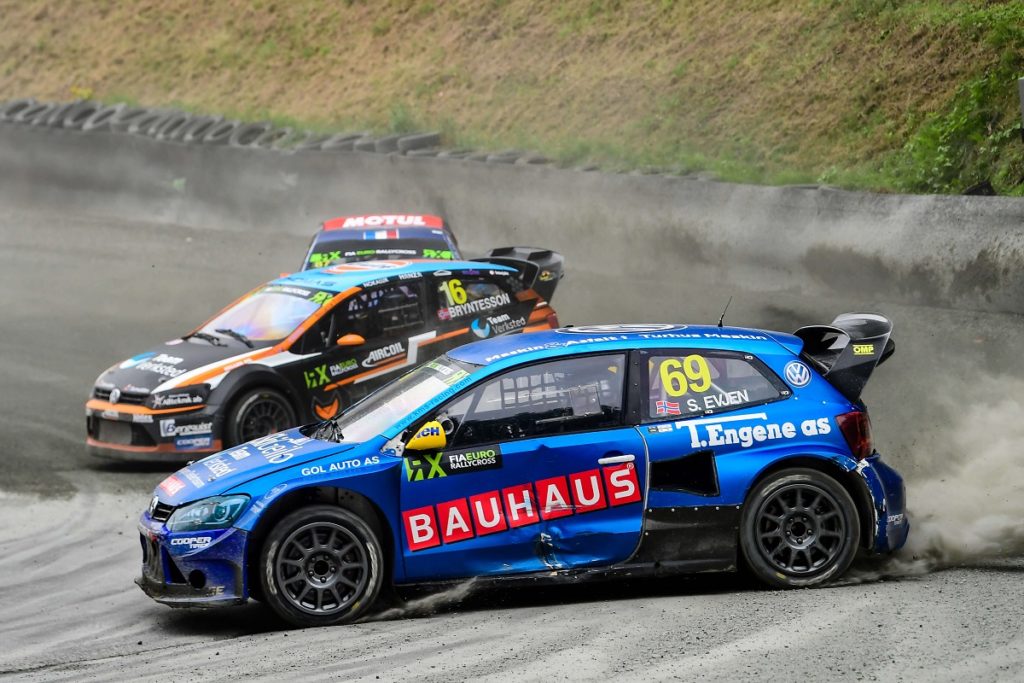 Christer Dalmans, in the second of the Hedstroms Motorsport Volkswagen Polos narrowly missed the semi-finals on his Euro RX debut. Czech driver, Ales Fucik, also in a VW Polo, was progressing towards qualifying for the semi-finals but was unable to start Q4 due to a broken front differential sustained in contact with the barrier in Q3 and finished at the tail of the weekend’s standings. Estering ended early for Portugal’s Mario Barbosa. His Citroen DS3 suffered a broken camshaft in free practice on Friday and saw no further action.

In Euro RX Super1600, Volland Racing’s Yuri Belevskiy scored his first ever European rallycross victory. He won the final in front of Hungary’s Gergely Marton and Norway’s Marius Bermingrud. Championship leader Aydar Nuriev was fourth. Russia’s Marat Knyazev made the best start in the final and took the hole shot but was contacted in the first corner melee and lost ground, before making a mistake at turn two. Artur Egorov ran third early in the race but crashed into a barrier when taking his joker lap, putting him out of contention. Russia’s Egor Sanin initially qualified for the final but was handed a five-second penalty for contact in this semi, which promoted Egorov into the final. Nuriev continues to lead the points on 110, with Marton second on 88 and Egorov third with 72.