Timmy Hansen claimed victory in a gripping final of the Dayinsure World RX of Great Britain at the SpeedMachine Festival, the fourth round of the FIA World Rallycross Championship presented by Monster Energy. Hansen thus became the first double winner of the 2019 season, following victory in Barcelona in round two in his Team Hansen MJP Peugeot 208. The Swede engaged in a titanic battle with Monster Energy RX Cartel’s Andreas Bakkerud who got the better of the start in Sunday’s final. Timmy eventually hunted the Norwegian down and there was only a car-length between them at the flag.

Timmy Hansen with the second victory in a row 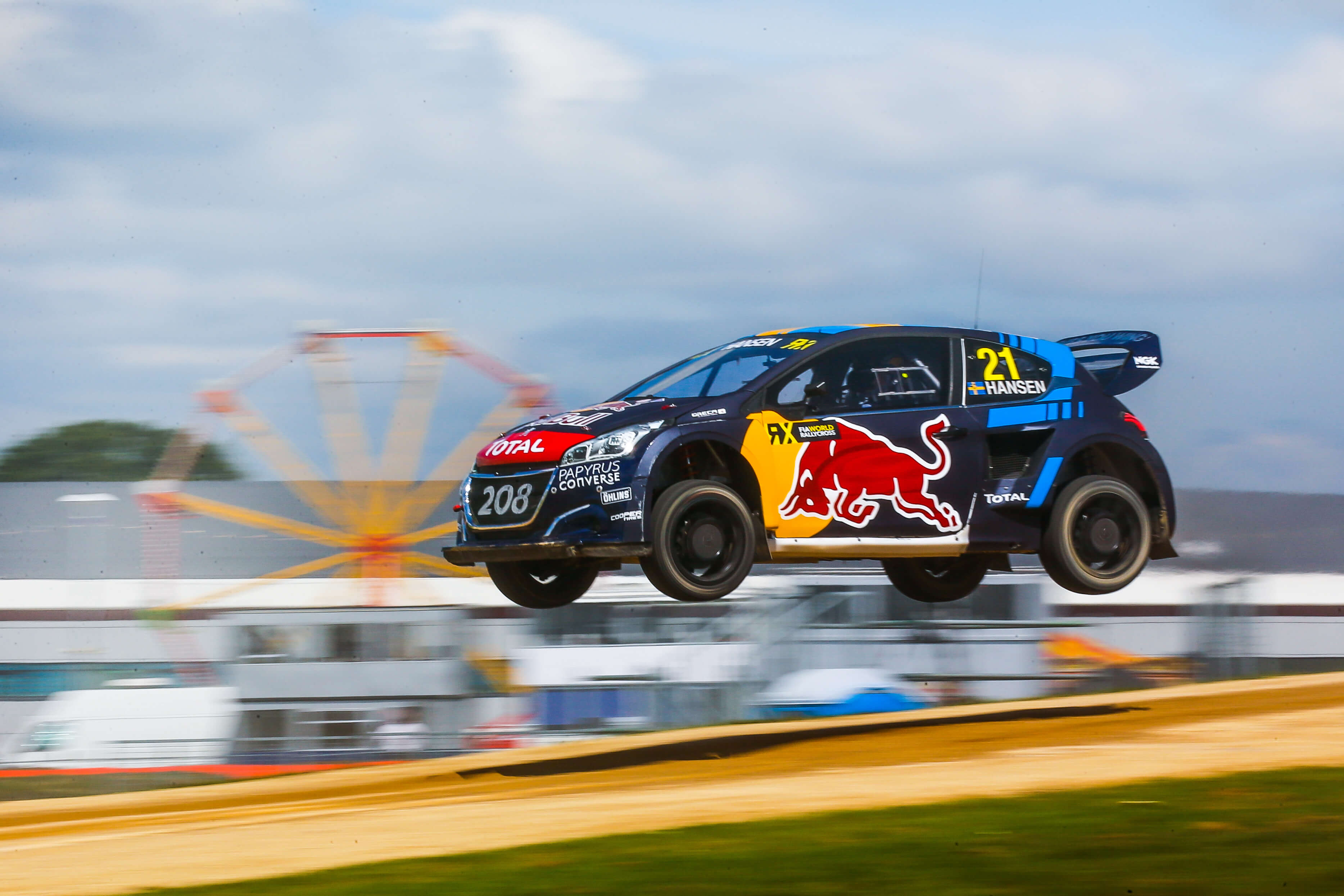 Hansen is flying high this weekend

“Today Andreas (Bakkerud) found some more pace and he was able to win both qualifying sessions. In the final, he had about a half a car better launch than me, it was tight going in to the first corner. Coming out second I knew I had to stay super close. I was absolutely on his bumper just before my joker lap which was a perfect lap. I kept on pushing, he went in to the joker a lap later, and when we merged I saw that I had a bit more speed and seeing him behind as we hit the finish line was a great feeling. I definitely had to work very hard to day to get this result.” – T. Hansen

Timmy also usurped his brother Kevin at the top of the drivers’ standings with today’s win. He sits on 88 points to Kevin’s 84 after the younger Hansen made contact with the tyre barrier on the last lap of his semi-final, meaning he missed the final. From a family perspective, Timmy admitted to mixed emotions after the race.

Bakkerud, desperately seeking his first win of the season, after being so close last time out in Spa-Francorchamps, was disappointed not to have reached the top step this time when the win was within his grasp. He also revealed that all was not well with the Audi S1. He had some issues with the handbrake. Every time he pulled it the car stalled so he ended up driving without the handbrake in the semi and the final.

“Belgium was OK because I didn’t feel I had the speed to win but this weekend I definitely felt I could. I tried to use every trick I had in the book so the final result does not feel good. This is four podiums in a row for the RX Cartel, we had both cars in the final here but just didn’t get the job done. It hurts a bit to sip champagne and not be happy. I almost had it in my pocket today. All I can do is keep on pushing and hopefully the win is nearby.” – A. Bakkerud 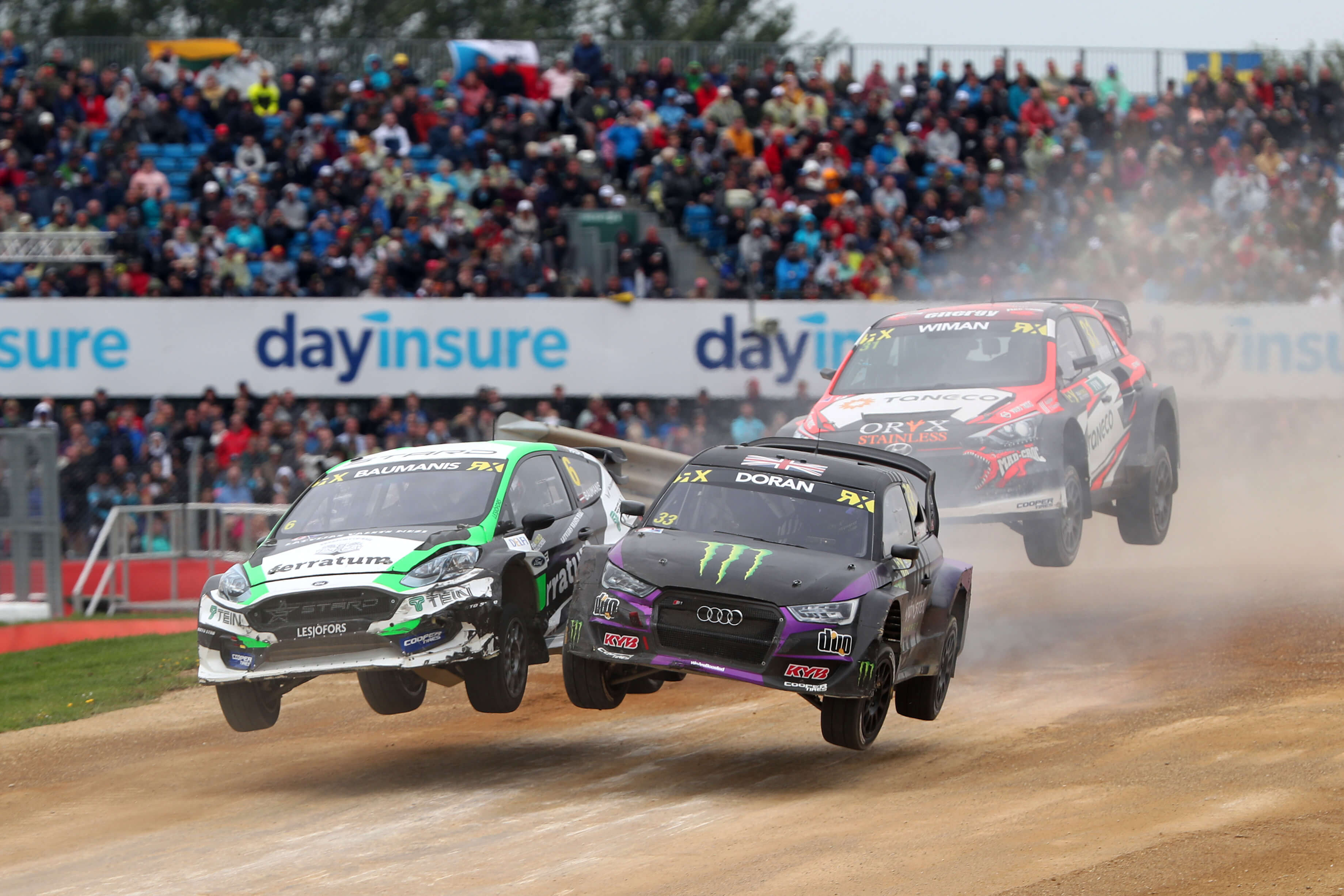 Doran vs Baumanis | World RX of Great Britain 2019GCK Kompetition’s Anton Marklund claimed third in the Renault Megane RS RX, the Swede’s first World RX podium place of 2019 and his second overall after a second-place finish in Canada in 2014.

“Since Abu Dhabi we have shown good pace and in Spa where we ran top three pace. It was nice to get the starts working in the semi-final and final today and to get some clear air,” he said. “I am very satisfied with a P3 and very happy for the team.”

Timo Scheider in the ALL-INKL.COM Muennich Motorsport team Seat Ibiza was fourth in the final just ahead of Hungarian Krisztian Szabo’s EKS Sport Audi S1. Unfortunately for British fans, Liam Doran, Bakkerud’s team-mate in the Monster Energy RX Cartel finished sixth in the final after an eventful home event. Fellow-Briton Oliver Bennett provided plenty of cheer for home fans by making his first ever World RX semi-final only for his Mini Cooper to catch fire on the final lap and end his race. Silverstone’s notorious jump was the culprit, the Mini bottoming out on landing and a broken oil seal sparking the blaze.

Joni Wiman wanted to do well

The second semi-final was red flagged after Joni Wiman, standing in for Niclas Gronholm in the GRX Taneco Hyundai i20 contacted the tyre barrier soon after the jump with the car rolling on its side. The resultant suspension damage to the front right-hand corner meant he did not make the semi-final re-run. 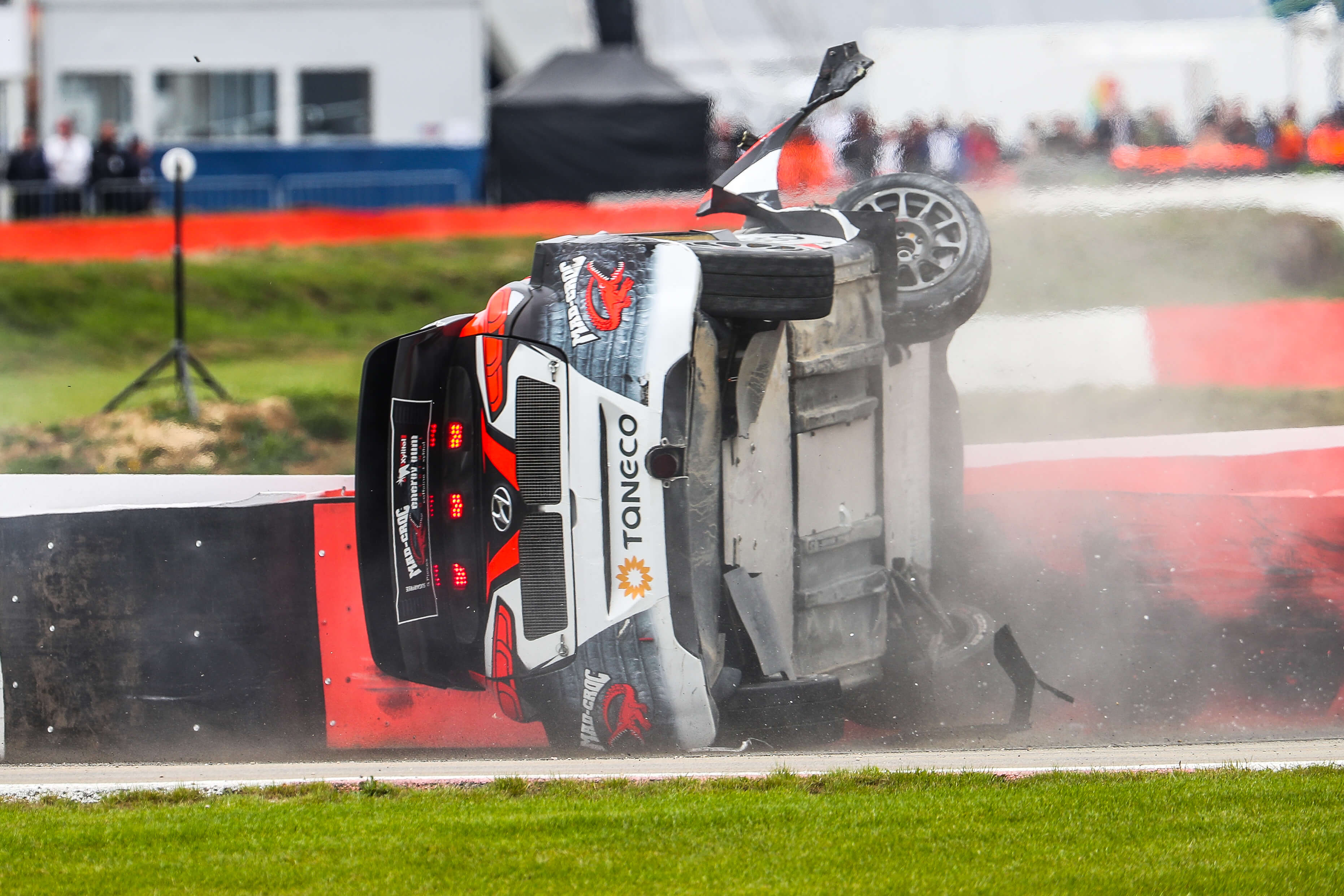 “It was a late call for me to step in for Niclas and I tried to do my best, but struggled with a rhythm and set-up for this track. Front row for the semi-final was a satisfying result. In the semi-final it all got very messy, very fast. (Janis) Baumanis and (Liam) Doran were fighting hard for the position and after the big jump I saw an opportunity and went for it. Unfortunately I got squeezed on to the tyre barrier and rolled the car.” – Joni Wiman

Timur Timerzyanov, in the sister GRX Taneco Hyundai i20, went from the high of a maiden World RX win in Spa-Francorchamps to the low of missing the final at Silverstone. “I was concentrating on my own race, but this weekend my result was not entirely decided by me. Next-up is race in Hell, Norway, and that is one of my favourite tacks in the championship so we need to focus on that now,” the Russian said.