Atkinson survived incredibly challenging wet and slippery conditions to take his second win of the season and secure the ARX Team Championship for Subaru Motorsports USA, as newly crowned 2019 ARX Champion Tanner Foust, who secured his title after the qualifying rounds, missed out on a place in the final after a track limits penalty halted his progress in the semi-finals. Starting on the front row, Atkinson took the lead into the first corner as pole starter Patrik Sandell had a slow getaway from the grid and dropped to sixth. Loenbro Motorsports’ Steve Arpin climbed from the second row up to second-place on Lap 1, in front of Norwegian Subaru driver Andreas Bakkerud. 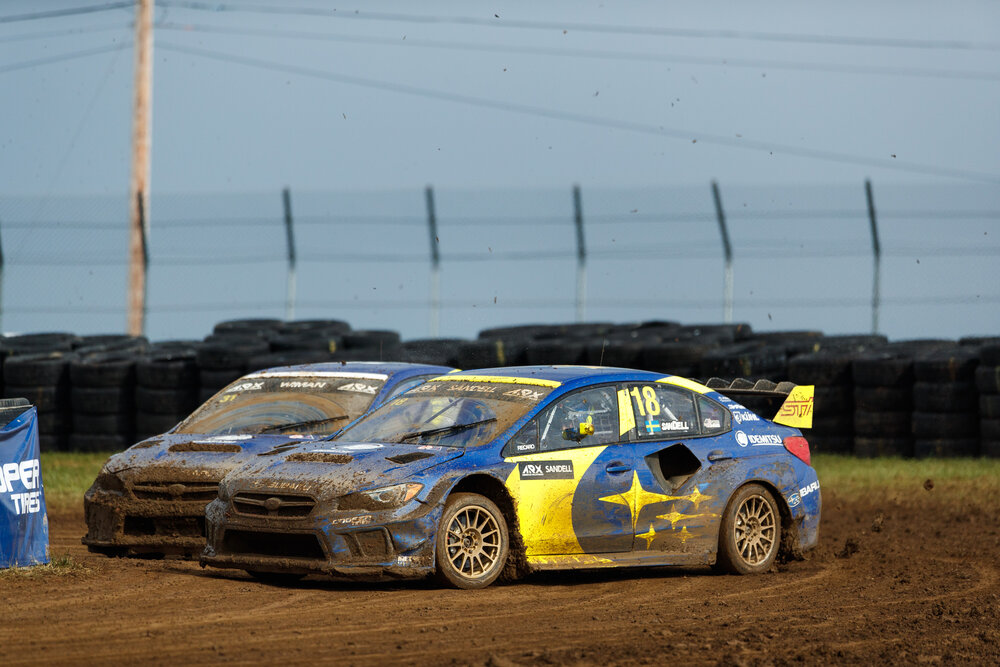 Subaru WRX – Sandell & Wiman – final round of Americas Rallycross 2019
With grip almost non-existent for much of the six-lap final thanks to additional rain before the start, the 600bhp supercars slid their way around the circuit as some of the world’s best rallycross drivers battled against the conditions. Sandell stopped in turn two and was only just avoided by teammate Joni Wiman. Bakkerud overtook Arpin for second on Lap 2 before Arpin slid his No. 00 cbdMD Ford Fiesta ST back up the inside of the joker lap merge at the keyhole. Bakkerud was forced to retire on Lap 3 with a mud-covered windshield.
Up front, Atkinson built a comfortable lead on the way to victory in the sixth and final round, as Arpin battled with Sandell in the later stages of the race. Wiman pressured Arpin to the line to initially complete the podium but dropped to fourth after he was given a five-second penalty, promoting Sandell to third-place in the process. Loenbro’s Travis PeCoy brought his machine home in fifth. The Andretti Rallycross team of Foust and rookie teammate Cabot Bigham failed to make it to the six-car final at Mid-Ohio. 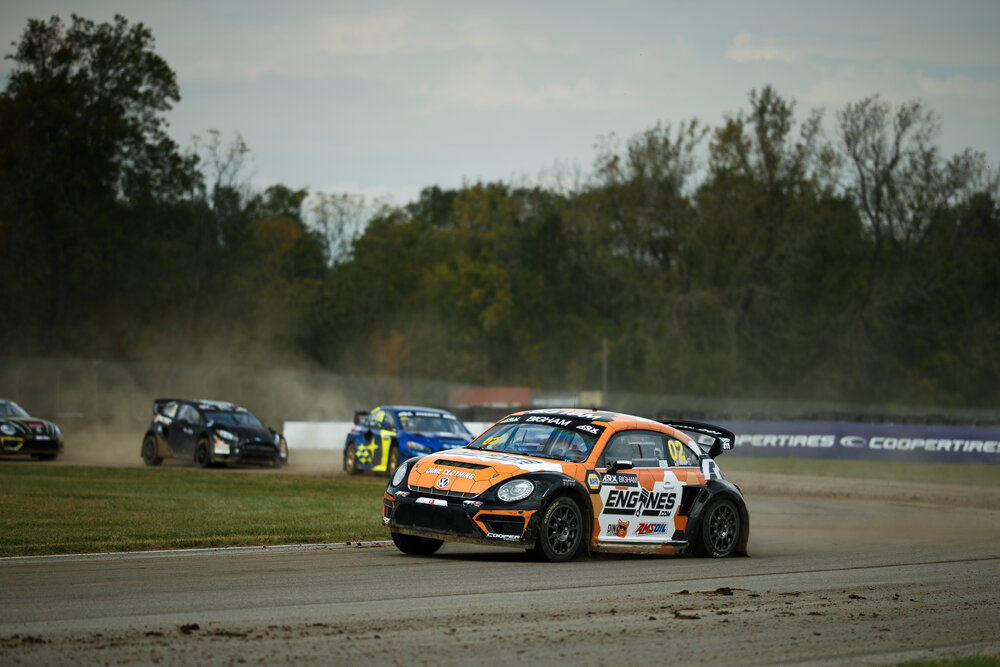 With Foust having already clinched the second-ever ARX title prior to the final, Atkinson’s win saw him beat Sandell to second in points for Subaru by a single point. Arpin ended the season with fourth-place in the standings.

“This is a big relief, it’s just awesome for the team and there’s something sweet about this year. The Beetles wrapped up five championships in five years, so they’ve been dominant cars. This is the first year we did it without manufacturer support and basically on leftover parts and going up against amazing factory efforts and newly developed cars. Honestly, it was surprising Volkswagen was willing to let us use the cars and potentially put them up to be beat after their track record. Andretti Autosport stepped up and offered to run the program on the thinnest budget and Cabot [Bigham] came in as a second driver and we somehow did it. While it’s five out of five, this year was really different, especially without Scott [Speed] as well. I’m so proud of the team and I think everybody in the team thinks there is something really different about this one and everybody is so stoked about taking the championship this year.” – Tanner Foust

In ARX2, the official support series to ARX, Jamaican driver Fraser McConnell capped off his record-breaking title-winning season in style by mastering the extreme conditions to take his fifth win of the year.
DirtFish Motorsports’ McConnell battled with Dreyer & Reinbold Racing’s Sage Karam at the front of the semi-finals, but in the final, the Jamaican driver took control and stormed to victory. As the single-make ARX2 cars battled to find traction throughout the race, Karam finished second, claiming his fifth consecutive rallycross podium in his first season. Buhl Sport’s Alex Keyes handled adversity all weekend-long and rounded out the podium in third. 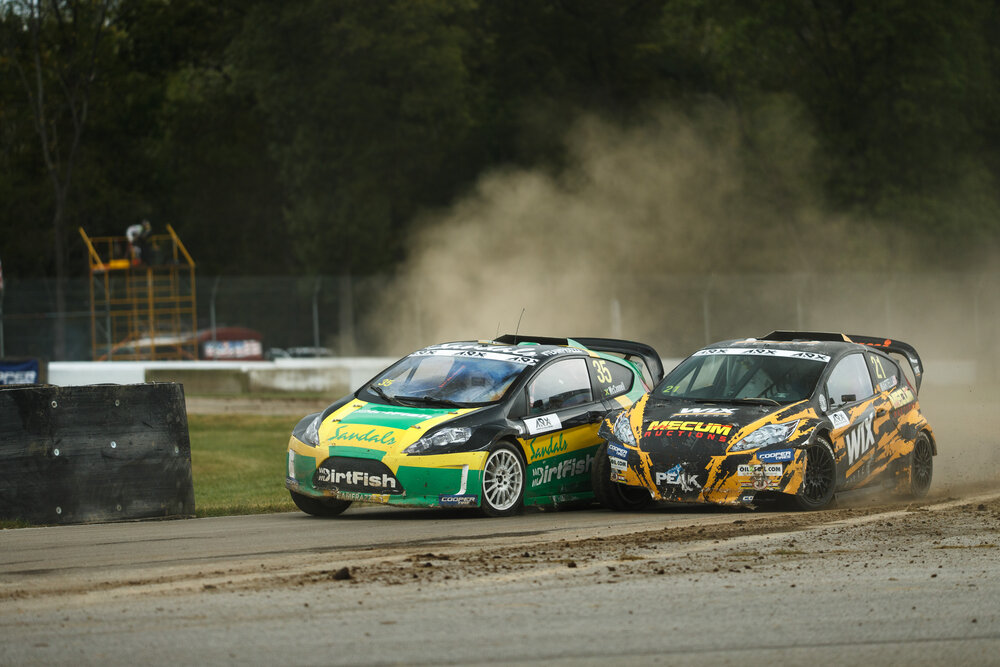 Keatts concluded the event fourth, which also secured him second in the ARX2 Championship behind McConnell. Loenbro Motorsports’ Michael Leach finished fifth, with DRR’s Lane Vacala finishing in sixth after his most successful weekend to date in rallycross. Outgoing ARX2 Champion Conner Martell missed out on the final with a mud-covered windshield early in the semi-finals. 14-year old Gray Leadbetter also missed out on the final despite showing impressive speed throughout the entire weekend. After podium finishes by Karam and Keatts this weekend, Dreyer & Reinbold Racing claimed the ARX2 Team Championship.
Tomorrow, the 2020 season begins with the inaugural ARX2 Cooper Tires Combine, giving drivers from around the world an opportunity to test an ARX2 car, with thanks to Cooper Tires and ARX2 teams. For the 2020 season, McConnell will have his entry fees waived and be provided with complementary Cooper Tires for his entire 2020 ARX or ARX2 program. In addition, he will receive four free one-day DirtFish Rally School courses in one of their four-wheel-drive prepared Subaru vehicles. 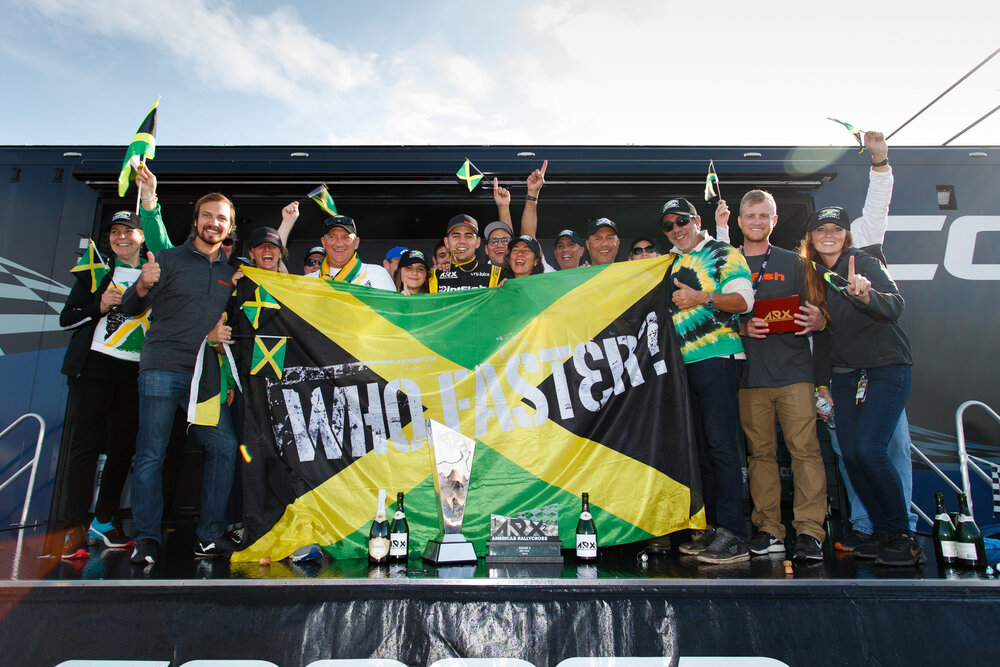 Fraser McConnell, 2019 ARX2 Champion (No. 35 Sandals DirtFish Motorsports ARX2): “Right now, it still has not sunken in fully yet. We started off the weekend poorly but was able to come back and get the win in the final. It was probably the slipperiest conditions I have ever driven in, other than that, the season went well. This track [Mid-Ohio Sports Car Course] is where I got my first-ever rallycross win and I think it’s only fitting it’s also where I got my championship win. There’s no question, I had to be on my ‘A-game’ this year, with this field, there’s no room for error and it’s just pure driving out there. Every single race, heat, final, I just had to make sure I had my game face on and make no mistakes.”