Andreas Bakkerud scored a stunning victory at the World RX of Canada in Trois-Rivieres to turn the drivers’ battle in the World Rallycross Championship presented by Monster Energy on its head with three rounds remaining. It was the Monster Energy RX Cartel driver’s first World RX victory since 2016 in Argentina. He had come close twice this year – second in Belgium and Great Britain – but on the daunting street circuit in Quebec it finally came good for the affable Norwegian.

Bakkerud acknowledged the efforts of his RX Cartel crew in finally securing a win that he thought might never come.

“We have worked hard as a team and I was hoping and praying that this day would come even though with all the bad luck and near misses we have had this season, I thought it might never happen. We have had some challenging months in getting the team together for the first round in Abu Dhabi. We were so close in Belgium and Silverstone and we were strong until the semi-final in Sweden. Even today, I had problems in the final when I burned the clutch at the start. But we have just stuck at it as a team and I’m really pleased for them and all the Bakkerud Blue supporters to finally get the job done. It’s been nearly 950-something days since my last event win. It wasn’t a race I expected to win to be honest. Canada is not a strong circuit for me. I’m just happy that the car kept in one piece so I could bring home the first win for the RX Cartel.” – A. Bakkerud

The win enabled Bakkerud to usurp Timmy Hansen who was second in the drivers’ standings heading to Canada and close to within five points of championship leader Kevin Hansen. Kevin was fifth across the line but was later disqualified from the final after the stewards decided he was at fault in a clash with GC Kompetition’s Anton Marklund. Kevin now leads overall on 143 points with Bakkerud second on 138 and Timmy third with 129. As for his championship chances, Bakkerud added: “It’s so close, the races are very unpredictable. I think it will be a race to the chequered flag in Cape Town (the final round of the 2019 championship in November). It’s not going to be easy to win the championship. You need some results and some luck. It’s going to be tricky but you never know.” 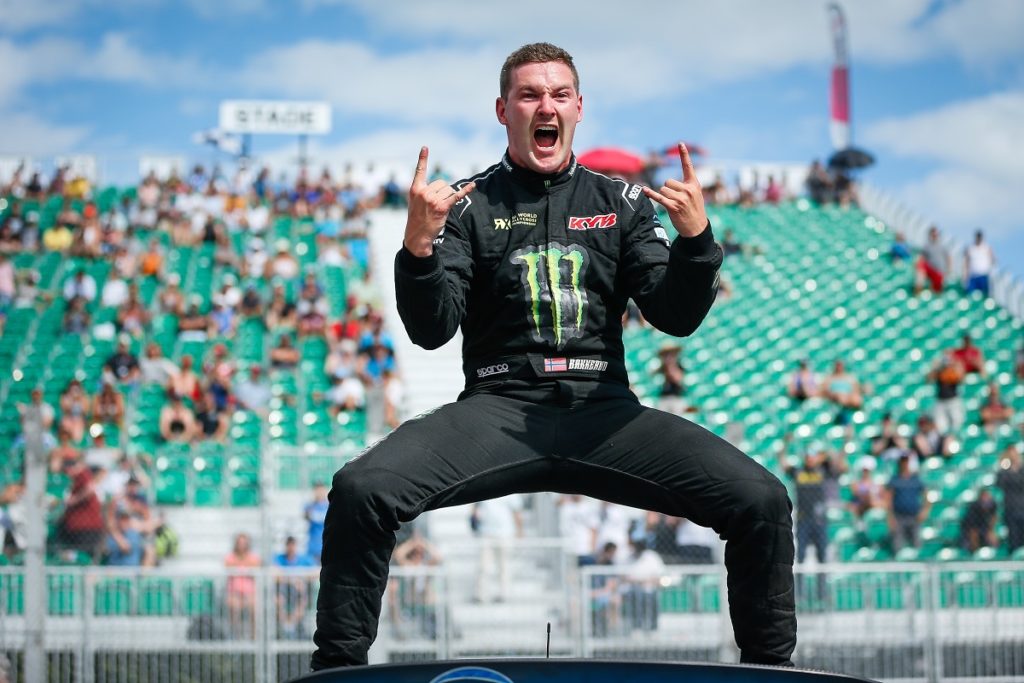 Trailing brother Kevin by just six points entering the Canadian round, Timmy was the big loser in the championship squabble after crashing in Q2 and a chaotic race four of Q4. His Peugeot 208 was severely damaged in multi-car contact and eventually crawled sideways across the finish line where it was retrieved by a recovery vehicle. The incidents meant he missed the semi-finals and emerged from the World RX of Canada with only four points.

Second to Bakkerud in the final was Team STARD’s Janis Baumanis who went one better than his third place in round five in Hell, Norway.

“It’s really nice to be here between these two guys. The team have worked really hard. This is my fifth final of the season so we are getting some rewards.” – Janis Baumanis

Third was GRX Taneco’s Timur Timerzyanov, who had pipped Bakkerud for the spoils at Spa-Francorchamps in May. The Russian had earlier wrestled his Hyundai i20 to a semi-final victory despite a broken suspension.

“Actually the car felt better to drive with the broken suspension,” he joked. “In the final, third place was a present for me after Kevin (Hansen) and Anton (Marklund) crashed in to each other after the joker lap. I was lucky today but that’s racing.” – Timur Timerzyanov 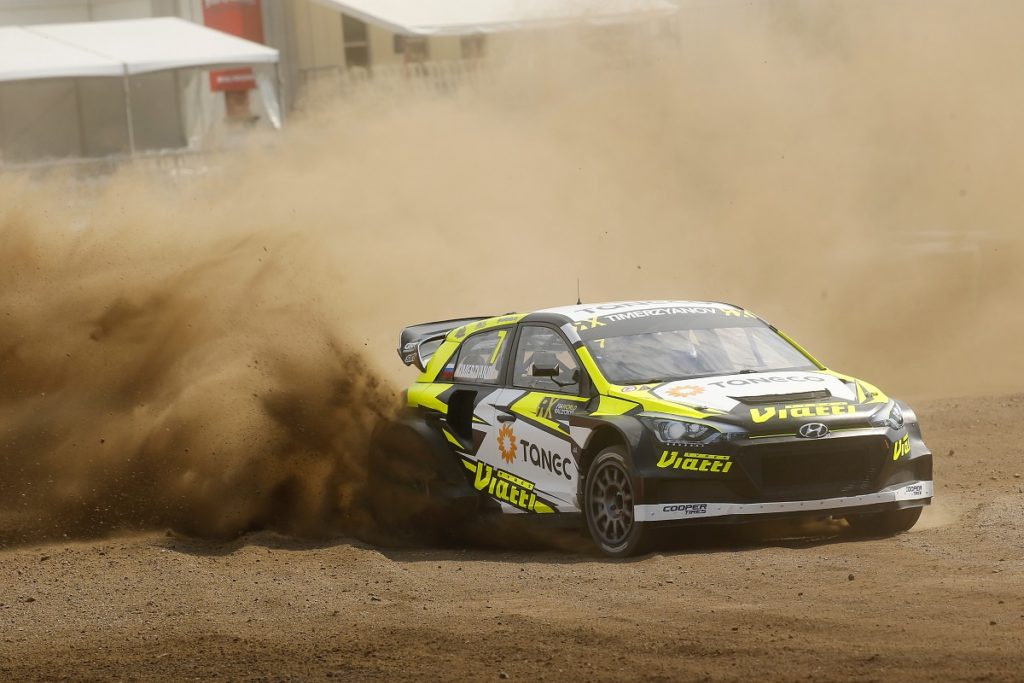 GC Kompetition team boss Guerlain Chicherit finished fourth to round out an impressive weekend. Marklund was classified fifth following the clash with Kevin Hansen which caused extensive suspension damage to his Renault Megane. GRX Taneco’s Niclas Gronholm, who had set the early race weekend pace, and finished as top qualifier, looked set to challenge strongly for overall victory. However, he paid the price for a costly joker strategy in semi-final one where he finished fourth and thus failed to make the final.

ALL-INKL.COM Muennich Motorsport’s Timo Scheider in the Seat Ibiza reached semi-final two but a clash with the Audi S1 of Monster RX Cartel’s Liam Doran resulted in bodywork damage and sixth place. The incident dropped Doran to fourth in the semi when it had seemed a place in the final beckoned for the Briton. EKS Sport’s Krisztian Szabo, sporting a ‘just married’ sticker on the rear bumper of his Audi S1 in recognition of the Hungarian’s recent nuptials, celebrated with a race win in Q2 en route to fifth place in his semi-final. 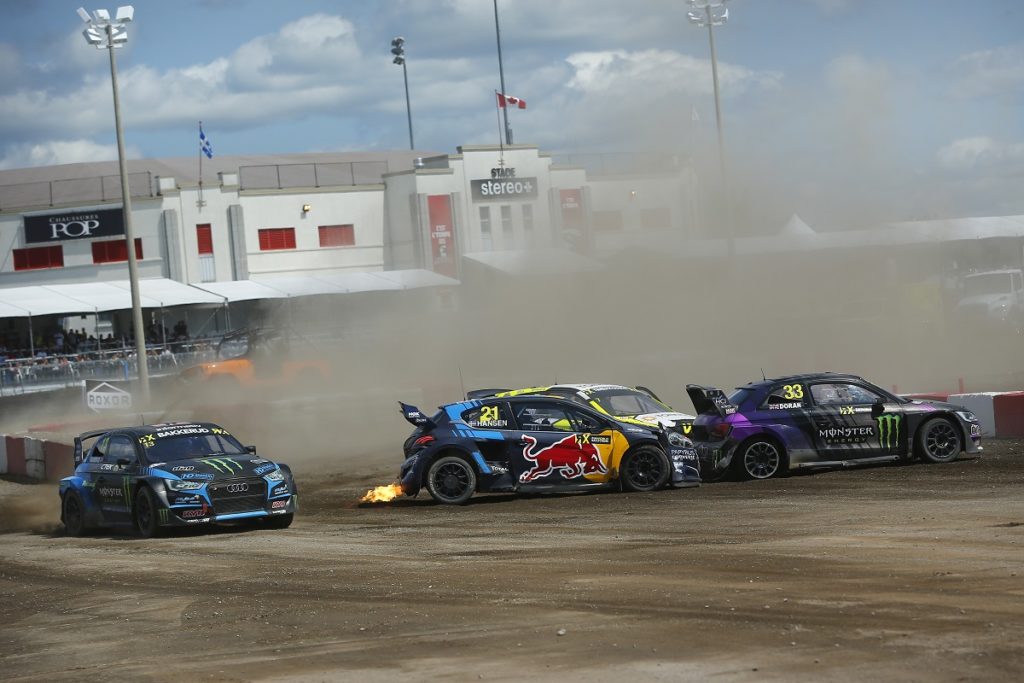 Some random photo from World RX of Canada 2019

Lithuania’s Rokas Baciuska, in the GC Kompetition Renault Megane, was on the back foot from Q1 after being handed a five-second time penalty for twice hitting track markers. The misdemeanours dropped him to ninth place after Q2. He recovered to reach semi-final one where he finished fifth after clipping the tyre wall. Fellow GCK squad member Cyril Raymond, of France, was thwarted by mechanical failure in the same semi-final.

Guillame De Ridder’s run of bad fortune continued with the Belgian finishing the event in 14th place overall in his GCK Academy Renault Clio. After a strong run to ninth in Q3, Oliver Bennett’s interest in the weekend ended in race 3 of Q4 when his Xite Racing Mini Cooper was sandwiched off the line and suffered broken right front suspension.

It was an eventful outing for Team STARD’s Jani Paasonen. The Finn’s issues began in free practice with contact with one of Trois-Rivieres’ famed concrete walls. His Ford Fiesta then crabbed its way over the line in race three of Q2 after further contact with a tyre barrier resulting in damage to the right rear suspension. He would eventually finish in last place.

The championship now visits Loheac for the Bretagne World RX of France from August 31 to September 1.